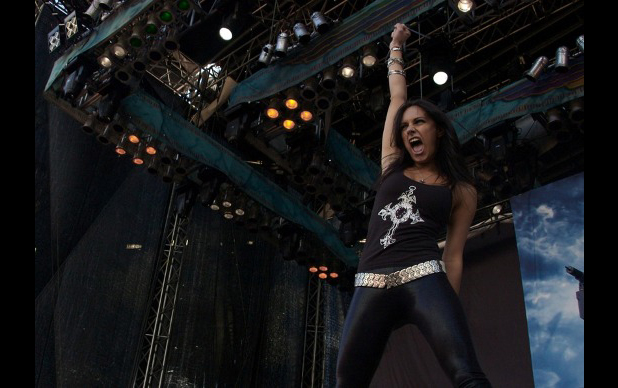 Not all the pretty girls sing pop in MTV. Lauren Harris, the daughter of Iron Maiden legendary bass player Steve Harris, paid a visit to Finland this summer to open the gigs for her father’s band, introducing her new album Calm Before the Storm to the Finnish audience. Before her second gig in Tampere, we had some minutes to chat with this English beauty in the backstage about the amazing experience of touring the world together with Maiden and what people can expect from her debut album.

Organization is a bit chaotic outside Tampere Ratina stadium, but we finally manage to enter the backstage area and chat with Laurent a few hours before her gig. After the interview is over, there is time to launch an attack on the free backstage beers while waiting to see if we can take a glance of Bruce Dickinson and his fellows passing by. No good luck, but at least to be able to interview and take some pictures with one of the hottest female rock singers nowadays pays off. And after the interview, the delirium with a good evening of heavy metal!

Thanks for attending us Lauren! You have released recently your new album but you have been in music business for a while. Can you explain us a bit more about your beginnings?

Yeah, I used to sing in pubs and stuff like that. Famous producer Russ Ballard happened to be in a pub during one of my shows and after he asked me if I would be interested in recording a demo for him. So of course I said yes. Later I talked to my dad about it and he asked “what was his name” and I said Russ Ballard and of course he knew him, I did not have a clue.

Coming from a family with musicians, were you listening to heavy metal and hard rock since you were a child, or which were your influences?

I was listening to more classic rock, bands like Gun, Golden Earring, and then I started listening to harder stuff like ACDC, Guns and Roses and so on.

So now with your new album, what can people expect from this Calm before the Storm?

I would kind of describe it as classic rock. Some songs talk about relationships, some about feeling good and stuff like that. I think there is quite a lot of different stuff there.

The title of the album is also kind of “classic” in English rock history, Saxon had a song with that name and also in the last album of Judas Priest there is one track titled Calm before the Storm.

Oh really? I did not even know that!

You also have a cover of UFO, Natural Thing, as extra track in your album. Who had the idea to include it?

It was my dad’s decision actually. He is a big fan of UFO. It is a band that I kind of started to listen to because of him, so he advised me that I could try that song, so we did.

You were yesterday singing at your first gig in Finland at the Olympic Stadium in Helsinki. How was it?

I suppose that maybe in this World tour you are visiting places you have never been before. Any special venue you remember?

Well, playing in the Madison Square Garden, being such a historic place where so many good bands played before, in front of thousands of people, was very special. Also when we were in South America we did a lot of outdoors shows with Maiden, with thousands of people there, so the atmosphere was incredible. South American fans are very passionate!

You have been working hard in your career as a singer for 3-4 years already but now this is your biggest world tour with Maiden. What do you think of the comments that people can make about that you are into this because you are “the daughter of” Steve Harris, etc and they do not pay attention to all what you did before?

Well, I try not to pay attention really. I have toured with Within Temptation; I have toured with The Answer, with Thunder before. With Maiden I have been given the opportunity because of my dad, I am not going to deny that to the people, it is very obvious. For the people who could criticize that I would say that well, if they would have a daughter in the same situation, they would do exactly the same thing. I have been touring now for 18 months, so I suppose that if things would have gone bad, then we had stop the tour ages ago.

I have curiosity, being touring with your father, how is the relation? Do you go to have beers together after the shows, or do you try to keep a bit independent from him?

Well, we do not have time to spend so much time together actually. I travel with my band and he travels with his band, flying everywhere and stuff like that. Well, sometimes we are in pubs together which is cool, I do not feel embarrassed like “oh god my father is here!” nothing like that, hehehe It is really cool with him.

After the tour with Maiden, what plans do you have, because you have not stopped much for 2-3 years? No time for holidays?

No, not right now. After the tour with Maiden we will have some weeks off in September and then we are going to continue on tour, headlining some smaller gigs.

Thanks a lot to the Finnish audience for come to watch and support me. I hope it won’t be the last time here!