This review should have had the title “Rammstein concert in Tallinn”. 2 weeks ago, I had everything planned and arranged to go to the Estonian capital when suddenly a stomach flu left me spilling my guts out, and totally destroyed the chances to go anywhere (and not only me, the virus affected to half of my job mates at the office).

Luckily, the Germans were playing 1 week later in Riga, relatively close from Tartu, and I convinced my Finnish friend Ilkka to come from Helsinki and drive to our destination of glory and rock. 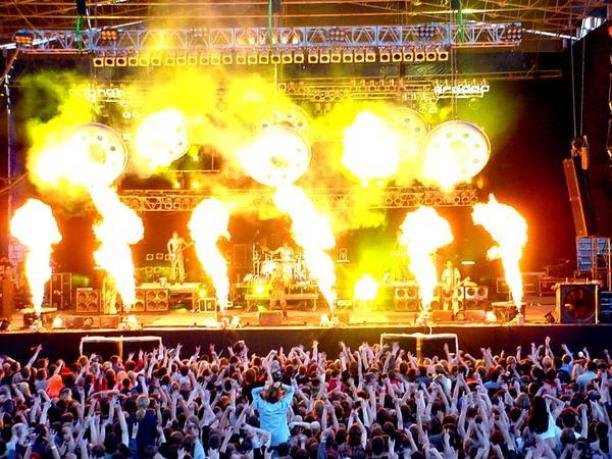 Rammstein must have been on the top 3 of the bands that I still had never had the chance to check live and really wanted, so it was worth the effort; although I cannot really thank the promoters from BDG-FBI. They procrastinated in answering my emails, and gently denied me any press ticket, apart from not answering anything when I proposed farther collaboration for reviewing their events. How many publications do you have in English focused on culture and entertainment in the Baltics? I suppose that it must be more rewarding to sit all day at the office checking Facebook and Orkut than trying to do a good work. But well… if I start to talk about incompetent people in promoting and events management positions in Finland or Estonia, I would never reach to the point of talking about the concert….

Arriving in Riga became a little odyssey due to the heavy snow falling. After 3 hours of driving from Tartu, we encountered traffic jams everywhere, a lot of police and ambulances running from one place to another, and 4 or 5 small car accidents around the Latvian capital. The city seemed to be receiving a summit from the World Bank instead of a rock concert. Some of my Estonian job mates mentioned later that the car accidents were due to them being 6-toed Latvians, but I will remain impartial about the sticky subject ;)

But what it is true is that the organization of the concert in Latvia was awful. We encountered another more annoying queue for accessing the parking or Riga Arena, which turned to be full. Luckily, driving a few hundred meters away, a friendly Russian guy left us parked in his parking for just 2 Lats. We did not have Latvian cash, so gave him 5 euro. The E-Tickets that I had pursued in Internet worked (thanks god) and then I encountered the longest queue for a male toilet that I have ever seen in my life. So I decided my kidneys should have to wait until the end of the gig. With the traffic jams, we missed the first band, so accessed directly to see Rammstein show in an ultra packed standing up area of the arena. And when I say packed, I mean packed. Organizers again fucked it big time. There should have been easily at least 200 tickets less sold out there. We were at the bottom, very far from the stage, and we already could hardly move, a situation that I had experienced before just when being near the first row close to the stage. It is a miracle that not more people got into fights there or fainted. Chaotic! 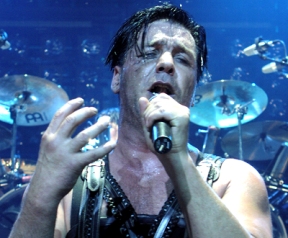 The concert started with Rammlied, but being honest, the first 4-5 songs were closer to a nightmare than being a joyful event. I was literally feeling like a sardine in a box and very far from the stage with no chance to advance or move. Not helping that the old Murphy´s Law about taller guys always standing in front of you in a concert, and me being not the tallest in the world, made me literally almost break my neck to try to see something of what was going on stage. Latvian guys for your information are not the shortest of the world, so it does not help when you have a fucking basketball team in front of you.

The cherry on top of the cake is that there were no screens on the sides of the stage. For a band with the category that Rammstein has, and with tickets whose price started at 50 euro, a small fortune in Estonia or Latvia, I did not understand this either. What is the point to create amazing pyrotechnic effects on stage when half of the audience is not going to be able to see a shit if they are not in the first rows or in the seating places?

Luckily and wisely, we moved to one side that was a little less packed, and enjoyed some of my favorite tunes like Keine Lust! or Weisses Fleisch. The middle part of the concert was a bit boring from my point of view, it always happens the same when a band I like releases a new album, I always think that they should not play so many of the new songs. For example, Frühling in Paris could have perfectly been erased from the setlist, while it was an absolute pity than songs like Spielt Mein Klavier, Du Riechst so Gut or Azche zu Azche were missed.

Undobutedly, the end of the concert was the best, with amazing tunes like Links 1-2-3, the unavoidable and always awesome Du Hast and the catchy Pussy. A great end that was followed up by an encore with Sonne, the surprising Haifisch (I was not expecting the keyboardist “Flake” surfing the audience on the inflatable boat with this one, but with the classic Seamann, which I think would have been still much better, and Ich Will for closing the first encore.

While it seemed that everything would be over, and more than 1 person in the audience started to exit, the band still gave an amazing present performing a second mini-encore with Engel, with a huge and beautiful white angel on flames displayed on the stage, that finished the show; a great end for a concert that left me a bitter sweet taste due to the chaotic organization.