After a long tour, Sigur Rós made their last appearance before some well deserved Christmas holidays at Harwall Areena in Helsinki.

I have not had the chance before to see them live, a couple of times circumstances worked against me when I was about to assist to their shows some years ago at Positivus Festival in Latvia and more recently this summer at Ilosaarirock in Joensuu. But finally the chance came in a cold freezing winter night that did not affect the good spirits of the citizens of Helsinki, who even when the asphalt outside the venue was literally a plank of ice in some areas and quite dangerous, slid their way down happily with a mastery that only the Nordic people are able to achieve to maintain gravity towards the entrance of Hartwall Areena, that looked less packed than usual with almost half of the seats not available. Certainly it was too much to expect that the Icelandic band would sell out such a big venue, but the assistance was still pretty acceptable, and it is nice to see that Fullsteam Records are able to bring their bands not only to small bars of mid-size clubs, but also to the big events and concert places around Finland. 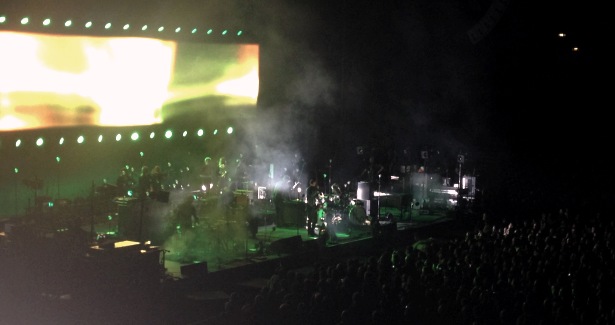 I said previously that I had never seen Sigur Rós live, and certainly at the beginning of the show, there was a moment where I wonder if I would be able to see them at all, but no other reason than a big blanket covering around the whole stage while colorful lights were projected on it and the band kept on playing inside. I liked the idea… for the first couple of songs… Problem is that the band did not appear until probably the fourth song, which in a way created a nice tension among the audience, but on the other hand I found it a bit too much. In any case, finally the high pitched voice of Jonsi could be heard while he was standing on the stage and the show reached for some moments an almost spiritual level, visually stunning fulfilled with a beautiful eclectic music played with a wide array of instruments that transport you to a happier place.

Although Jonsi seem to prefer singing to communicating with the audience, he did not forget to make a small break to invite to the front to one member of the choir so the rest of the band could sing her happy birthday.

A bit more of 2 hours of something that cannot be defined by less than a beautiful musical experience with nothing to envy to the amazing beauty of their homeland Iceland (watch the documentary Heima if you want to experience a perfect combination of both) . I was just sad after the show that the setlist did not include Starálfur, my all time favorite tune from the band.