Street Hockey, also known as ball hockey, dek hockey or road hockey, is a variation of ice hockey where the players play on the ground with sneakers or rollerblades instead of on ice with ice skates. This is why this sport is easy to play and everybody can participate, regardless of their skill level. This year 144 team were chasing the Finnish Street Hockey championship title.

Street Hockey is usually played on asphalt which is why helmet and ice hockey gloves are mandatory equipment. Although it’s also recommended to use protective cup and knee pads. In Finland the Game time is 2 X 10 min. and in this sport the gaming time doesn’t stop during the game breaks. Street Hockey is played with a small plastic ball. 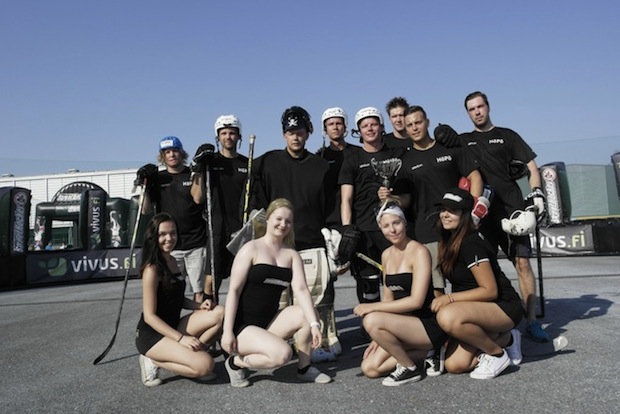 In addition to the tour and the exciting games, the gaming area was filled with entertainment and events for the audience. Throughout the whole tour the audience had the possibility to test their own strength with the hockey shot radar. One of Finland’s most known hockey players: Jarkko “Rudi” Ruutu tested this hockey shot radar in Helsinki with the result speed of 153 km/hour. And of course the aim of many hockey fans was to beat Rudi in the hockey radar. The speed of the best shot during the whole Street Hockey Tour was over 190 km/hour. Another partner to Street Hockey Tour in Finland was the Finnish online casino Netticasino.com, which provided the audience entertainment in their tent with their roulette and blackjack gambling tables. Netticasino also had a raffle throughout the tour where one lucky winner from Oulu won a season ticket to Kärpät ice hockey team for season 2014-2015. Read the interview with the winner here.

Throughout the whole, almost two months lasting tour, many famous faces were seen and also many hockey players participated the tournament. In Jyväskylä the audience could enjoy games watching Stanley Cup winner Ville Nieminen playing in the Blockfest team. The northernmost city in the tour also provided the audience excitement with a “star game” with Finnish known hockey players such as Juhamatti Aaltonen, Julius Junttila and Joonas Donskoi.

Helsinki finals in August was popped with people and no wonder, since the “star game” at Saturday 2.8.2014 was played with hockey stars such as Esa Tikkanen, Jarkko Ruutu, Leo Komarov, Veli-Matti Savinainen and Juha Koivisto.

Be ready for the next year’s Street Hockey Tour, since for sure there are going to be even more teams participating, and it’s going to be bigger and of course better, so sta