From Punksvall, Sweden, come these 6 guys who have played together apart from being close friends since 2008. And being honest, they have turned to be one of the few new bands I have heard lately that made me play their homonymous CD , Jetbone, more than once.

I receive copies often from bands, and I usually lack the time to review or listen to them several times, but with Jetbone it was love at first sight. I like the simple but stylish desigh of the CD, and of course I also love the music inside. 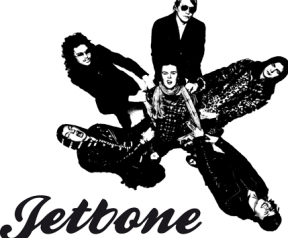 The point is that actually Jetbone does not sound originally at all, just classic rock with blues influence, classic guitar riffs, clasic lyrics… but maybe that is its charm, it feels like if this would be one of your favorite bands even from the first time you listen to them. The album already starts with 2 very catchy tunes, Dancin`On Your Grave and Baby It`s Your Time, and continues with a very high level. Actually some songs like Time by Time reminded me a lot of their Swedish fellows The Hellacopters, while in other compositions like Dead City Fire you can really feel the influence of The Rolling Stones.

I can imagine myself dancing in some small dark concert hall that smells of sweat, cigarettes, beer and in the background the music of Jetbone. If an album can inspire you those feelings, it means this is really rock & roll. And I like it! One of the surprises of 2012!