Portuguese artist and old colaborator Marcos Farrajota visited Finland during the Comic Festival hold in Kamppi, so we had the chance to talk to him about his views on Finland and his current exhibition in Helsinki Comic Centre:

Hi Marcos. You are currently in Finland for the comic fair, and you have visited this country a few times in the past. Can you tell us your impressions about Finland, and what brings you here so often?

I come because of the comics fest. I like Finland culture: music and comics, and I think Finns funny…. They are more latins somehow that look at first sight!

Were there any works-artists that you especially liked during the comic fair in Helsinki?

I think this year the festival looked more commercial so I actually missed some older artists of the Finn scene and didn’t found brand new blood or something that blow my head like in the past. But the best one should be OLIVIER SCHRAUWEN

You told me that you are going to spend time in a residence for artists near Turku. What are you going to be doing there during the next weeks?

I’m doing my new comic book. It’s about people that collect stuff, archives and piracy. Should look like an essay but as usual with autobiographical episodes… 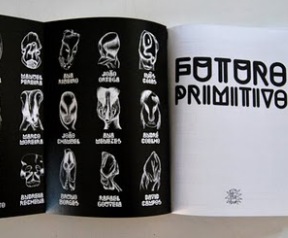 You have a new comic book, where you have put together the works of many artists that send you stories. Can you explain a bit more in detail about the project?

For starters it’s called Futuro Primitivo (Primitive Future in English, Primitiivenen Tuleivassus in Finn) , ripping off a Sepultura song, hahahaha! Well, I fed up of doing anthologies and decide to make a new concept for this… So I decide to make somekind of “narrative DJing” which means that I ask to 40 artists to send comics with a “post-apocalitic” theme but in 2 strips per page so that then I could remix the sequences and turning 40 stories in just one story. I guess nobody made this and this opens a new way to work in comics in the future. Also, you can download for free the soundtrack of the book /exhibition on the net-label You Are Not Stealing Records.

You have a current exhibition in Arabia in Helsinki. Can you say a bit more about what the visitors can find there, and until what date will be running?

Until 1st October, you can see the original work / drawings of the book, so it can see a contemporary comix from Portugal authors. You have all kind of images and graphic styles, I guess this is good for starters, then you can see / buy also Chili com Carne (the label of the publisher of the book) editions and the silkscreens – some also are “graphic DJing”, we ask some graphic designers to pick up images of the comix book to make a new image / poster / silkscreen.

What are your next projects after your stay in Finland?

Actually the show goes to Mälmo (Sweden) to open there in 14th October… I try not to think about the future (primitive or not) because I’m focusing in my new book so going to Sweden is already something real… And then in December is the Independent Edition Fair in Portugal – in Porto, at Maus Hábitos venue. Go there!