Sometimes you go to a gig and you feel that you did not get what was worthy the ticket. This is not the case with Rammstein. The Germans visited Finland again, and gave proof of why they are nowadays one of the most amazing bands in the world to see live.

It does not matter if you speak and understand German or not. They have been able to connect with the international audience not singing in English, which is already a merit that not so many bands can be proud about, and the theatrical perfomance that accompanies their show is just outstanding. I can just imagine how difficult must be to rehearse their tours before starting. That is Rammstein, a band with a solid career that entertains you song after song while their music makes elevate your feet from the ground almost unconsciously. 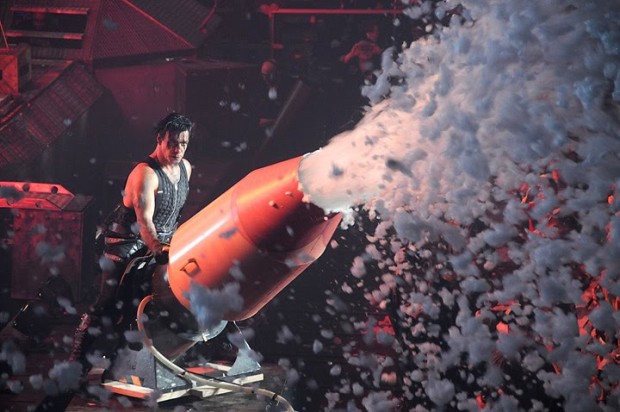 During this Made in Germany Tour, they just played safe shooting hit after hit of their already 17 years of career together. But the schenario was up to the challenge. The band appeared from one lateral side of the arena with the band walking slowly, holding both their flag and the Finnish flag. Without losing time in speeches to the audience, frontman Till Lindermann and his boys just went straight to business to play amazing song after amazing song: Sonne, Keine Lust, Asche zu Asche, Mutter, Du Reichst so Gut… The Germans sound and act still as powerful as when they astonished the worldwide audience with that already far in time classic live concert Live Aus Berlin. Of course it could not be missed in the setlist their most popular hit Du Hast, whose chorus was shyly chanted by the Finnish audience when Till lent them the micro.

If the audience was a bit cold, excepting the first rows of unconditional fans, the band did not let the temperature drop, coming for a first encore crawling all over the bridge (and that short trip had members of the band humping on each other and getting whipped included) that linked the main stage with a smaller stage in the middle of the arena, ready to perform Bück Dich with Lindermann soaking the first rows in water with a fake penis. And that is what Rammstein is about, powerful catchy music, fireworks, masculinity with muscular Apollonian bodies displayed, sense of humor and sexuality mixed in an explosive cocktail. 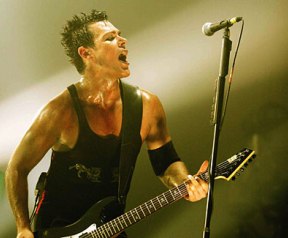 The big surprise of the night came at the start of the second encore, when Rammstein was joined at the stage by Finnish cello virtuosos Apocalyptica to play together an amazing version of Mein Herz Brennt.

More classics like Engel or Amerika delighted the audience, with the band putting the cherry on top of the cake with Pussy to finish a rounded concert. Well, more than the cherry, we could say that putting the cream on the cake, because Lindermann took control of a giant mobile cannot painted like a penis that bathed on foam half of the areena. Is there any better way of making the audience reach a climax at the end of a live perfomance?

You can love them or hate them, but in my personal humble opinion, if you want to see a band that offers something unique, raw, powerful and provocative in the rock scene nowadays, you should not miss this tour. Rammstein is still a must see live!

One Response to “Concert Review. Rammstein at Hartwall Areena. Helsinki. 15/02/2012”