British metallers Demons Of Old Metal recently streamed their latest single “The Quiet Ones” via Puregrainaudio! Taken from their upcoming new album “Dominion”, which is due for release on December 7th, fans of the band can check out their latest offering ahead of time!

Check out “The Quiet Ones” here – http://puregrainaudio.com/audio/demons-of-old-metal-the-quiet-ones-exclusive-song-stream-premiere

Sat somewhere between classic Exodus, Pantera & GWAR; theatrically tinged British metallers Demons Of Old Metal have been making an unholy din across the UK for a while now. And if latest record “Dominion” is anything to go by, they’re just getting started!

Formed at the tail end of 2010 by four veterans of the UK metal circuit with the sole intention of cranking out classically tinged metal and engulfing venues in a sea of blood, sweat and beers. Coupling a cracking knack for writing quality songs, their penchant for schlock horror imagery and an otherworldly stage show, DOOM set about putting together their debut record; “The Demonic Chronicles Vol I”. Released on Halloween 2012, the response from fans and the media alike was overwhelmingly positive and saw the band begin making a name for themselves. 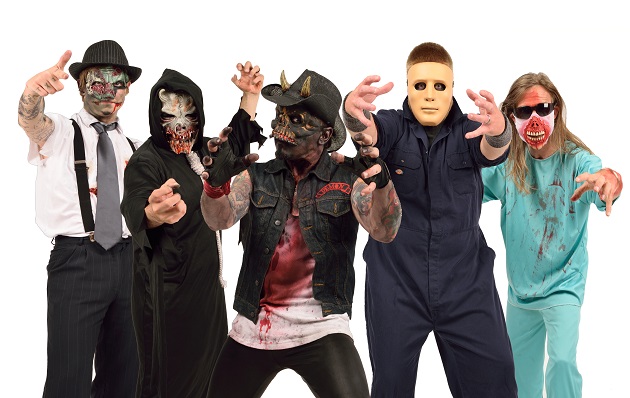 In 2013 the band released “The Demonic Chronicles Vol. II”; a further addition to their stunning repertoire. This was followed in 2014 by the final part of “The Demonic Chronicles Trilogy” which was greeted with critical acclaim in Europe and the U.S. They proceeded to hit the road and carve their mark viciously into the psyche of the British live scene; scoring slots at Beermageddon in the UK, as well as shows in Ireland.

Simultaneously, they began work on their new record “Dominion”. Set for release on December 7th 2015, “Dominion” stands as a huge leap forward, as the band have pushed their musical boundaries and created a work that will no doubt appeal to fans of both the new and old schools. Tracks like ‘You Version 2.0’, ‘Fakeskin’ and ‘Behind The Mask’ are groove laden gems on a record full of brilliance. Tall and short of it; you need Demons Of Old Metal in your life.