The Baltic Circle Theatre Festival brought to the Finnish capital a wide array of perfomances, Finnish and international, for all tastes.

One highlight was the introduction of Drama Reloaded: Yerma, a work that revisits the classic play by Spanish writer Federico García Lorca confronting the themes of drama and reality while in the perfomances were added comments from interviews with 12 people childless for different reasons.

The director of the play, the Finnish Katariina Numminen, kindly answered the questions of FREE! Magazine to explain more about this and some other of her current and future projects.

Hello Katariina and thanks for answering our questions. From where came the idea to adapt and revisit the classic “Yerma”? Were you very familiar with the original Lorca´s work?

I was impressed how very modern Yerma was, what it comes to characters emotions, and to their relationships with each others. I read the play years ago, and I went back to it now, when I wanted to this project about infertility etc. I have of course read Lorca’s work before, but this was the first time I directed his work to the stage.

“Yerma” dates back to 1934, a period in Spain when it was quite common that the roles of wife and husband were defined, with the man working and the woman as housekeeper. Do you think that it continues being a modern topic, even when young couples nowadays usually both work and often they do not even have time for raising or having children, though being fertile?

As I said at some point during the reherseals: I find that Lorca’s spanish village with all the strict rules and demands and honour and such, is not that different from the demands and set of expectations and rules each one of us carries in our heads. So, Lorca’s wiew is not valid what it comes to society, but somehow, strangely, it is very true psychologically. We tend to have terrible demands for ourselves.

In Drama Reloaded: Yerma, the drama basically faces reality and gets analyzed and dissected while taking place. But does the art do not lose in a way the “magic” touch to play with the mind and imagination of the audience when you confront it with reality?

Only if one is looking for an illusion sort of art, a coherent fiction to which to dive and escape from reality. I think fiction and reality do tend to “contaminate” each other on stage. Both change when contrasted. But this is exactly what I find interesting. 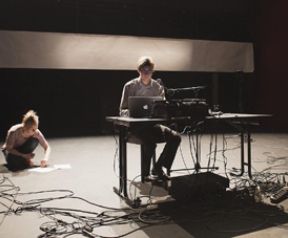 During an act of the play, I noticed that the actors basically represented the original text of Lorca in Spanish language. Was very challenging for them to learn the lines? Did they have previous knowledge of Spanish language? Why you decided to mix Finnish and Spanish languages in the play?

No, they are not Spanish speakers, so it was hard work for them to learn the lines. But we had a wonderful Spanish coach, who read the lines with us. I wanted to have a scene in Spanish, in a language strange to most of audience and to the actors, because I found that a crisis or a emotional shock can bring us to as state in which we don’t anymore know the language, the words we are speaking ourselves.

If I am not mistaken, you also had a project in Kiasma that is closing just this week, called “Coconut Disco”. What can you tell us about it?

Coconut Disco – Afrikan ääniä was shown last spring as a part of Ars 11 exhibition. It was a live radio play and live performance at the same time. Collaborating with me were musician Rodrigues Jose and sound desingner Kimmo Modig. It was about sounds. A try-out to make space African sounds and voices. The question was: do two people ever hear or see the world the same way.

You collaborate with the Vyborg Artistic Theatre in Russia. Do you spend long periods abroad, or do you live all the time in between Helsinki and Vyborg?

I live in Helsinki.Viipurin taiteellinen teatteri is a project which started in 2002, as a project where we, 6 Finnish Artists, disguised as Russian Viborg Artistic Theatre and made a performance called The Dybbuk. So we acted Russian actors acting that performance. We have made 5 performances since that.
We have a premiere coming, “Viipurin taiteellisen teatterin viimeinen esitys” (Vyborg Artistic Theatre: Last Performance) in Teatteri Takomo in Helsinki this New year’s Eve, and performances during January 2012.

What future plans do you have for the next months? Will Drama Reloaded: Yerma be played around in other theatres in Finland?

Drama Reloaded: Yerma is perhaps having more performances next March.