Game of Thrones – Will George R.R. Martin finish the saga of Song of Ice & Fire?

The first season of the TV series Game of Thrones is over. Yes, I confess, I am also a fan. I was already a fan of the books before the series started, so as many others, I was expecting it with joy and fear. And the result, I must say, has been superb! Congratulations to HBO, because it was not an easy task to comprise the first book in just 10 hours (10 chapters of 1 hour), and they did an amazing job with a great script, decoration and cast.

Of course, there will be always fans that won´t be totally happy with everything. Some complained that the werewolves were not much shown, others that there were important scenes cut, etc. I think that all in all, you cannot ask for much more in a TV adaptation of such a twisted saga of books. The cast was mostly nailed (maybe I am not totally satisfied with Catelyn Stark, but well…) and the extra scenes added that did not appear in the book, such as the fight between Jamie and Edward Stark, did really give some extra value there. Besides, the intro is one of the best I have ever seen in cinematographic history, and the soundtrack really gets you hooked, I already have the intro song as ringtone in my mobile phone ;) 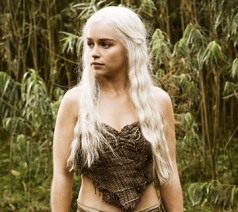 Now the sad part is that we will have to wait for another year for the second season, that it is reported to being shot in Ireland this summer. The task becomes bigger and bigger, the plot in the books gets more diversified, with more characters added, more magic, more important situations that are keyword to understand for what is coming next… Will HBO be able to pull the rabbit out of the hat again? It is a difficult question, taking into account that more special effects will be needed. And even more important, how would it develop in the series, as in the 4th and 5th book, they narrate the story of only half of the characters? Will the fans have to wait one year for example if this reaches season 4 to see later what Tyrion is up to?

Questions with no answers yet, for the moment we will have to pray that at least the series continue offering the same level of quality. And if somebody can do it, those are the guys of HBO, who by the way also deployed a super official site for the series, sometimes even offering the chapters to see fully for free there.
I had the chance to interview the author of the books, George R.R. Martin, a couple of summers ago, during his visit to Tallinn. And I have to say I have a bittersweet memory of the encounter. First, he held a meeting with the fans, and was all sympathy and jokes. Somebody asked about the possibility of he not finishing the saga, and he just joked that he was keeping at a safe distance of the buses. But when I repeated politely the question in the interview, he was quite cold about it. And let´s be honest, it is the question that everybody is wondering about. We wish George a long happy life, but he is not a child anymore, and the last book had continuous delays. My interview took place in summer 2009, and he said that the new 5th book, A Dance with Dragons, would be released that September. Well, it has been released just some weeks ago, 2 years after he announced that. And magically, it happens to be released at the same time that the TV series first season is over.

Was the book ready for 1 or 2 years, and they preferred to have the marketing strategy of making the fans wait, to take more advantage for the sales of the heat of the TV series? It looks like, which was not very polite and considered for the fans that had been years waiting for an update in the saga. 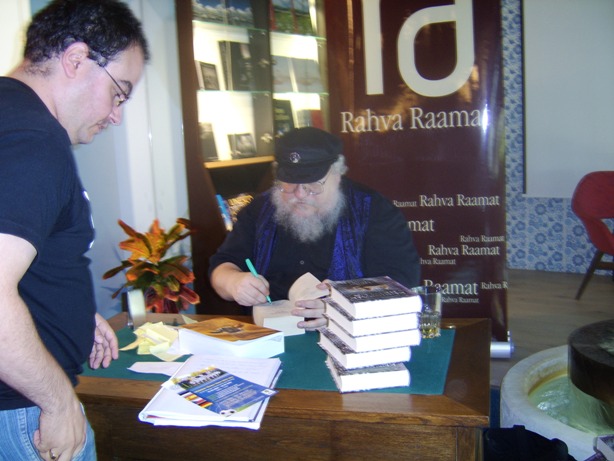 Martin also dedicated himself in the middle of the interview to sign books that were on the table, which I do not consider a very polite gesture towards the interviewer. He has been journalist himself, so should have a better notion about these things. And the cherry on top of the cream came when at the end of the interview, his wife came very angrily to tell me she had not liked the question about his future and the possibility that he would not finish the saga, and I should erase it from the interview. Martin was a few meters away, and he did not open his mouth to try to smooth the situation.

Was it not polite to ask him? Well, it is what all the fans are wondering about, and I only asked if he had any other author in mind that he would like to continue his saga if for any reason he could not finish it (does it ring a bell the unfortunate death of Robert Jordan and his amazing Wheel of Time saga?). It shocked me that they showed their best friendly face to the fans who asked the same things, and then with me, a journalist from a small media (who is basically a fan), they were so annoyed and not totally polite. Reality is the way it is, if it takes 3-4 years for him to release a new book, and there are still at least 2 to be written, what would happen when the TV series, that it is broadcasted 1 season per book, reaches the stage where the last book was published?

Good news could be that while the release of the fifth book was procrastinated, maybe Martin was already advancing the work for the 6th book. But probably nobody knows except of himself and his publicists.

All in all, I think that a fantasy and science fiction writer like him owes respect and seriousness in his work to the fans, who are the ones that made him famous and gave him money. So maybe instead of embarking in long tours around the world to have a full stomach eating well and get bathed by the adoration of masses, and assisting HBO with the series, he should do what he can do best as a one of the greatest fiction writers nowadays: to sit and write and end the saga. Millions of fans are craving for it, and they have been waiting already too long.

One Response to “Game of Thrones – Will George R.R. Martin finish the saga of Song of Ice & Fire?”