Megadeth will be playing in Haapsalu Castle in Estonia the 16 of July, and surely it is going to be a hell of a show! So for all the metal fans in Estonia, do not miss that one! Our collaborator Kadri had the chance to interview their drummer Shawn Drover some days earlier, while they performed at Tuska festival in Helsinki, Finland, and here is how it went:

To start off – I know you’re playing in Estonia on 16th of July. Since I’m from Estonia I wanted to ask – do you know anything about Estonia? 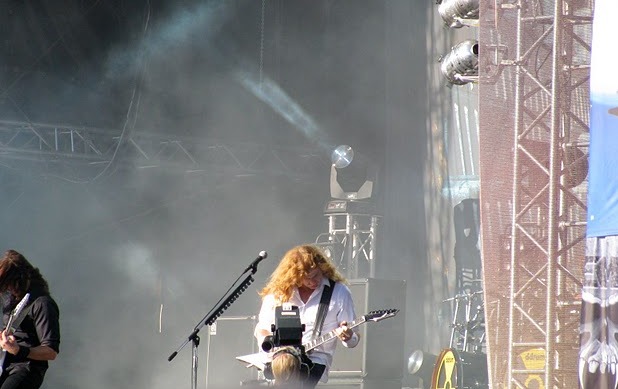 That’s great because you are playing in a very beautiful place.

Yeah, it should be an awesome gig for you.

Plus it’s the last show. So, it’s going to be fun and I’m really excited about it.

I saw your concert that was broadcasted through satellite. The Big Four concert. How was that experience for you?

Did you see it in the movie theatre?

Yeah, it was an interesting experience.

I’m sure it was, I’ve would have wanted to see it too if I weren’t playing. But it was fun. We all had a lot of fun. Of course during our gig it started to rain as crazy but still it was fun and we had a good time. And of course the big thing we did at the end (performing Diamond Head “Am I Evil?”). That was a lot of fun. And I think the whole thing was a really good experience for me and for the band. We had a really great time.

That’s great. It was seen that even through the cinema you were all enjoying yourselves.

Yeah, you can’t fake that. You can see all these metal bands with smiles on their faces so it was truly great.

What about your last album “Endgame”? How happy are you with it – musically and commercial wise?

We’re very happy with it. In terms of success – the way things are with the Internet downloading and stealing music it can’t be compared to earlier time when records sold platinum – times have changed. That’s the way life is and how the music industry is right now. Bands don’t sell as much as they used do which sucks but its (the “Endgame” album”) very critically acclaimed record, many people really love it, our fans love it. As long as we have fans there actually isn’t anything to worry about. And we get new fans every time. We just keep doing our best and hoping for the best. And the sales have been down for everybody. But I still consider this album a success.

I read that you are working on a new album and it should be out in 2011. Is that right?

We’re talking about it. We have been in a tour mode at the moment but we have started to work on a couple of ideas. But just very few ideas only. During a sound check we recorded a few ideas but we’re going to finish this world tour and then come together and start working out these ideas. We hope it will be out next year but we’ll see how things will go.

You have received many awards. How important are these awards to you?

Well, I’ve never gotten a Grammy award (laughs). I’ve been in the band for six years (since 2004) and we were nominated with the song “Headcrusher” but we lost that to Judas Priest. It’s cool to be recognized by the industry, it’s nice to have been offered awards, to have been nominated. We appreciate it a lot. It’s like 25 years later and Megadeth still gets nominated. So, I think it’s a really good thing. We just try to make good music with every record. People still like us after 25 years so we have to do something right.

You have been to Megadeth since 2004 so you have played mostly to bigger audiences. But maybe you have also played to smaller audiences. Which is a better place to play – to more intimate and smaller places or big audiences like this festival?

I think they are both good for various reasons. When you play at a smaller place it’s fun because you can pretty much almost see everybody and it’s closer. But playing like this festival is fun too because you can see all your friends and other bands. You know the Cannibal Corpse guys are here and we’re very good friends with them. They are all fun for different reasons. The Big Four stuff with Metallica and Anthrax was a lot of fun too.

You said that you are in the band since 2004. How did you become a part of this band?

My brother was in the band first – Glen Drover. They called me up and asked if I wanted to be a part of the band. And of course I said yes. It happened pretty fast, Nick Menza was brought back to the band and for some reason it didn’t work out and so they turned to me. But Glen is not in the band anymore; he got tired of the touring and left the band. So then we got Chris, which is great.

I read also that you play the guitar. Maybe you wanted to be a guitarist in Megadeth?

No, no. Not this band (laughs). This band is way too hard for me. But I did write the song “Headcrusher” with Dave on the guitar. I’ve been playing guitar for years. But I’m not that good to be a Megadeth guitarist. So, I’ll stick to the drums.

Regarding the guitar – many Megadeth songs are featured on Guitar Hero. Have you played Guitar Hero yourself?

No. I suck at that stuff. I’m not good at those games. My son actually is really good at it. But I think it’s cool for kids to get into the music and also a new way of people getting in touch with our music. That’s a good thing if they go and buy the Guitar Hero and actually they are buying our music also. But I’m not good at that and I’ve never played any Megadeth stuff.

I once saw a clip where Arch Enemy’s Michael Amott tried playing his own song in Japan on Guitar Hero and failed.

Yeah, it’s different. It seems that the kids know how to do it but we fail so we let them do it (laughs) 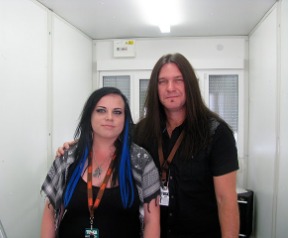 Megadeth is famous for it’s political lyrics (some songs). But how do you feel about politics? Are you interested in politics?

No. Dave’s very intelligent in very different ways and he’s very educated with politics. He writes about many things he knows and politics is just one thing. He’s very educated, very smart and he writes good lyrics. Every time we have a song, the lyrics are very good. Politics is a cool heavy metal thing to write about. It’s good to write about many things not just one subject all the time.

There is the “Behind The Music” that is on VH1 in America but it went only until 2001. So much has happened after that so I think that at some point the whole story should also be told. We haven’t done that yet – this year has been very busy, we’ve been touring, then the Big Four thing and we also have a DVD coming out and also new record coming out so we haven’t had the time to think about it. At some point it would be nice to do an official video-biography from the beginning until this day. I hope we do that some day but right now we are quite busy. There are a lot of interesting things to talk about.

Did you have time to see some band here at Tuska?

No, we just flew in and pretty much just got here. We saw W.A.S.P for like 10 min. But overall we’ve been here like an hour. But after we are going to see Cannibal Corpse play a bit and afterwards we get on stage. Festivals are weird in a way – sometimes you have a lot of time but other times you have less time, like today we have 2 hours until the gig and we have to practice, do interviews and stuff. It sucks sometimes.

Isn’t it tiring sometimes? Like now we are also doing an interview.

Nah, it’s not. It’s part of what we do. It’s part of spreading the word, it’s part of our job. And I love doing it anyway. It’s better than being a construction worker. And it’s good for the band – fans see that we talk about our stuff openly. I think that interviews are always good because it helps to get the word out and contributes to people coming to our shows. It’s communication and it doesn’t bother me at all, I enjoy it.

I think that nowadays the live shows are important because your music gets more attention than only with the records (with all the Internet downloading and stuff).

Yeah. But the Internet is good for many things also. It’s good to get the word out. You can put this interview to Blabbermouth and the whole world can read it.

Thank you so much for the interview!

No problem. Thank you.