If you like gloomy animation movies, certainly you will enjoy Metropia. From Scandinavia comes a plot that has to do with mind control and a new world order, all set in quite dark landscapes. Director Tarik Saleh achieves the desired effect of feeling comprised in a sad world walked by sad gray people, and you can also notice the hand in the script of Stig Larsson, a very hot name nowadays due to his Millennium trilogy (the part of the daughter from the big magnate abused as a child has his signature all over it). 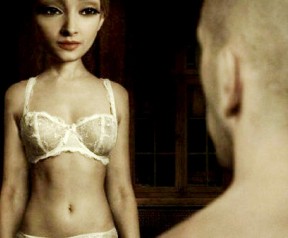 However, I could not fully enjoy the movie. It tries to be provocative, but falls in a middle way. Same with some nudity and explicit scenes, in the end they seem to be censored so children could watch this, when supposedly should be just an adult animation movie. And I cannot get used to the way the characters are drawn, with small bodies but huge heads. The beginning was promising, but at some points of the film, the lack of energy from Roger, the main character, is contagious.

Worthy a try if you are open for some different European animation with deeper meaning than just killing all what moves around, but I was expecting a bit more from this one. Not as visually and idealistically shocking as it should have been.

The best: The character of Nina, with the always sensual voice of Juliette Lewis.

The worst: the lack of rhythm during some parts.

The detail: Vincent Gallo puts the voice of the main character, Roger.

One Response to “Metropia”