American super star Rihanna visited Helsinki for the joy of thousands of fans, many of who had already enjoyed a long weekend of good music at Flow festival in the Finnish capital.

Of course it is not easy to arrange the perfect date for a concert, but maybe the date was not the most appropiated one to hold an “On the Beach” festival at “Hietsu” beach in Helsinki. The 15th of August in Helsinki is almost like autumm time in South Europe, and what should have been a parade of bikinis and swimsuits turned into the audience wearing jackets and gloves to fight the cold wind that beats on the shore of the Finnish capital. There were missing some bonfires around to warm the atmosphere. 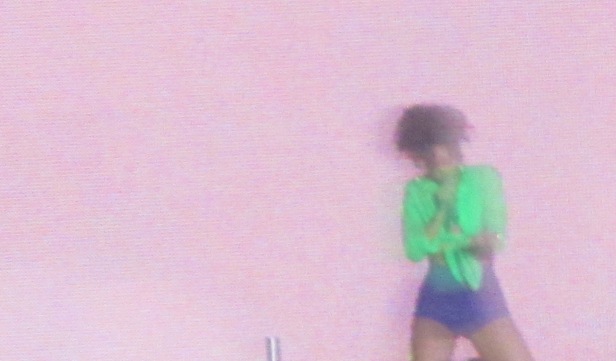 Even though the climate was not the best for a summer festival, still some brave members of the female audience have the courage to step into the water and refresh themselves dancing while waiting for Rihanna to step on the stage. Her presence was scheduled at 21:30, but the American did not appear on stage until 1 hour late, another misfortune for many people who had to work next day (tuesday) and could not even wait to see the end of the gig.

All in all, the Finnish fans are patience, and the charisma of Rihanna made them soon forget the awaiting. Rihanna started the concert using heavy artillery to put everybody to dance with hits like Only Girl (In the World) or Disturbia, and the young teenagers of the first rows turned crazy. Rihanna was moving from one side to another of the stage dressed with tight purple shorts and a green jacket, easy to be spotted even by the last spectator on the beach, very well accompanied all over the show by professional dancers. Special mention for the amazing riffs of Nuno Bettencourt, the ex guitarist of Extreme that puts a rock touch during the current Rihanna´s tour. The acoustic on the beach was good, but there were quite a few moments during the show where the volume of the music and micro bounced considerably up and down.

There was also some time for romanticism in the middle of the concert with ballads like Unfaithful or Hate that I Love You that made the couples to melt in hugs instantly to pass again to more danceable rythms with Don´t Stop the Music or Rude Boy, ending the first part of the show.

The artist came back to the stage to perform a couple more of songs, putting the cherry on top of the cream with the archifamous hit Umbrella. The fireworks announced that the cold summer night in Helsinki had been flown by a great show where Rihanna displayed all her charm and magnetism going through her discography. A good concert that could have been memorable if organized 1 month ago in a weekend day. Time for most of the audience to rush home and get a few hours of sleep before the alarm clock was sounding on tuesday morning.