Street art in Helsinki… and in Las Matas!

Street Art is finally determined to conquer the public spaces all around the world. Going from small populations that sometimes see their essence reduced to the highway exit number they represent on the map, to those cosmopolitan cities where the reinvented hipster urban culture (people riding retro-bicycles in their cool hats, checked shirts and carefully worn out jeans) seem to be melting the snow.

And that is how, leaving the A-6 highway at exit 24, we arrive at Las Matas – a tiny town located in the Northwest area of Madrid, Spain. The inhabitants of this quiet-to-the-boring place spend their lives surrounded by holm oaks and a never ending succession of residential neighbourhoods, a routine just altered when a new restaurant opens its doors, or when once a year, on the first of May, everybody gets extremely drunk celebrating the municipal festivity.

So, last Christmas, on the morning the villagers woke up to a bright rhombus-shaped sign, placed in the middle of the roundabout that gives access to the district, a mix of confusion and pleasant surprise sparkled the air. ” WELCOME TO Fabulous LAS MATAS. Little Town”. That was the readable message on the board. A creative work done by a fine arts student as a copy of the one that stands in the American Capital for gambling, Las Vegas. The funny thing is that we could play a new version of “find the seven differences” using images of both places each side of the page, but this time we would have to call it, “find the seven million differences”. And that is why the sign was so warmly adopted by the villagers. A pinch of irony accompanied the thought that Las Vegas was so, so far away, maybe not even in the same Galaxy, and, at the same time, that was such a relief.

Then, the Town Hall realized that the sign had been placed without the pertinent Administration´s permission, and thus, it was removed. But just temporarily, because people have the bad habit of fighting for the things that make them smile, and so the locals decided to use the social media tools to start a supportive campaign, so that they could keep their new (and fresh) identity symbol, and eventually, it worked!

Töhry is the Finnish word that describes a “mess” in a wall. From 1998 to 2008 the City of Helsinki developed an annually renewed initiative called the “Stop töhryille-projekti”, whose aim was to remove graffiti, stencils, stickers or any other kind of street art expression from public space. In order to assure the walls would remain clean, the City relied on private security operators such as FPS, a company founded in 1997, whose power and influence were specially reinforced over the (also known as) zero tolerance period. However, in 2003, scandals based on the aggressive strategy followed by FPS to fight what they labelled as vandalism damages, started to appear in the media. There were some testimonies from youngsters reporting how they had been beaten up or mistreated by the security agents when they got arrested for supposedly being graffiti painters.

“Fifteen year old guys were hit and fined during this period“, says Kukka Ranta, a very fluent in Spanish journalist and photographer, who, together with Mikael Brunila and Eetu Viren, wrote the book “Muutaman töhryn tähden” ( an investigative work to provide an in-depth perspective on this recent decade). Then, while nibbling at a non-curved croissant, she explains that the system established for the payment of the fine added on 16% annual interest if the fee remained unpaid. “This regulation led those teenagers who had been fined to a very complex financial situation in which asking for study grants or any other kind of private loan would be no option, given that they had already contracted a large debt with the Administration”, and Kukka continues, “Isn´t that the best way of ruining somebody´s life for having done a harmless minor act?“. 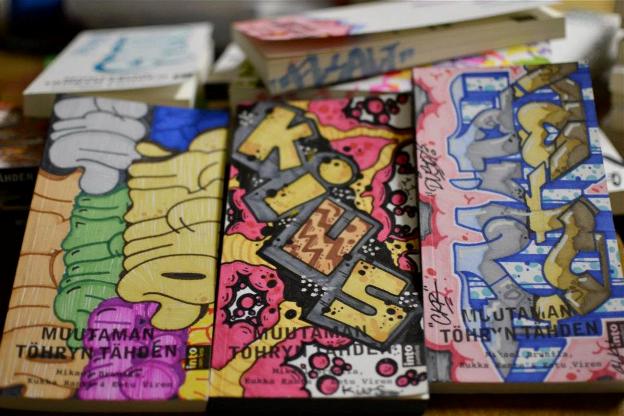 One of the inflexion points was in 2006, when somebody posted a video on Youtube that showed a man being hammered at night by a couple of FPS security agents. The scene occurred in Kontula – one of the most conflictive suburbs in Eastern Helsinki with a serious problem of alcoholism. The publication of these images, together with other initiatives such as the demonstrations organized by leftist political groups, the pressure put on the issue by independent media and online fora, and the creation ( by Kukka Ranta herself and her colleagues) of a website where critical voices surrounding the “Stop töhyille-projekti” were gathered, precipitated the end of the programme two years later, in 2008. By that time, a new discussion based on the possibility of opening public spaces for new artistic purposes, rather than strictly commercial ones, was starting to take shape within the Helsinkian society.

The story of the “Multicoloured Dreams” (MCD) project starts, like many others, with a visionary idea. And the first driving force behind it was Pauliina Seppälä (journalist and sociologist) who at the beginning of Summer 2010 launched a question to a Facebook group called RHC – a refugee hospitality club Pauliina herself was coordinating- wondering if anybody would be interested in painting street art messages on construction site walls. The previous year, construction sites in Helsinki began to have plywood walls put around them, which, scrutinized by an incisor look, provided the perfect temporary canvas for a new treatment of street art, which would start being legally protected… without giving up its provocative component.

There were two people who immediately accepted Pauliina´s offer: Satu Kettunen, still one of the leaders of the MCD crew, and an Indian architect named Kavita Gonsalves who was then living in the Finnish Capital. “I must admit that it was a really happy coincidence that the three of us got together, because we were a good combination of vision, devotion, thinking outside the box, and all with hands-on attitudes. So very soon we had planned a nice project“, explains Satu when asked about the beginnings of the initiative. The first thing they did was to suggest having the project included on the official calendar for the upcoming Helsinki Design Week, and, when the organizers of the event accepted, they continued the process by asking for the City Architect´s permission. With the eagerly awaited green light, there was just one more thing to do: spread the word around the social media, so that every artist wanting to participate in the project could have the sketches prepared to be approved. Satu also considers that their modus operandi, based on the ultimate respect for the political and social authorities, helped them succeed in their approach, “The fact that we were politely asking for the permissions, and showing them the sketches before painting…the whole procedure seemed to fit here. They trusted us”. 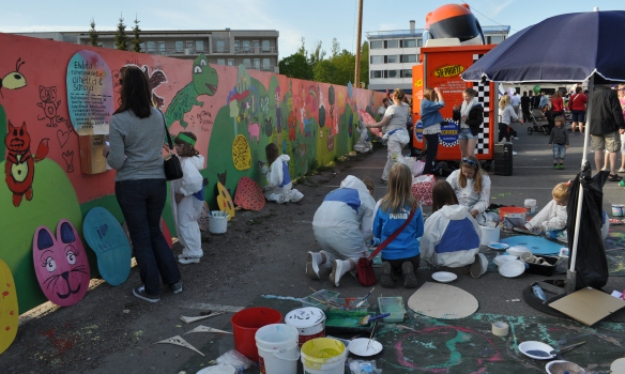 After the open-call projects developed for the Helsinki area in 2010 and 2011 (both based on voluntary work, meaning no institution was financially backing up), there is one assignment that occupies a significant stage in the trajectory of MCD: a big, half-year-long, project made for the City of Kauniainen, located inside the Espoo area. Its skeleton as a whole included street art workshops for students and seniors, a painting day for kids, a couple of artworks produced by the 8 people who belonged to the coordinating team and an invitation to Otto Maija to act as a guest artist. The City commissioned all the activities, the teaching, the organization and the painting itself, and this gave regular citizens the opportunity of playing artist role for some days. Not only could they explore their hidden talents and creativity but they could also contribute to the beautification of their home town.

Applying for grants is one of the main tasks the MCD team has to face in order to assure the growth and social impact of their association. “More street art projects need to happen in Finland, that way, the financial support will also increase. That´s how the grant policy works in this country“, says Satu, always pointing out that their goal is far from creating a profitable business. In the same sense, Veera Jalava, a younger -but equally attractive- version of the actress Anna Torv (Fringe), and another member of the MCD organisational team, remembers that “the original philosophy of the initiative relied on voluntary work. It wasn´t thought of to earn a living out of it, but to make the city more alive. To give wider possibilities to everyone to do street art“. 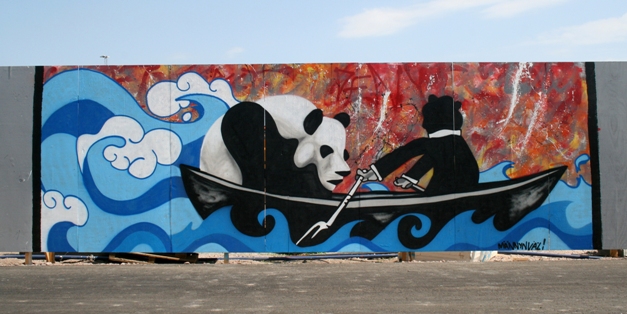 Antti Mannynvali agrees to this non-profitable perspective. The artist, who has contributed with his talent to one of the MCD projects in the centre of Helsinki, considers that voluntarism is a core issue, “for me, this is something that is aimed at those who just want to produce visible art. The motivation for doing this is not money. But even then, since the visibility provided here is hard to reach otherwise, that could culminate in other gigs which might involve getting paid“. Then, when asked about the relationship between the city and the possibilities for street art, he claims, “A large part of public space could be open to artistic expressions. It is something that interests and motivates young people to be creative, and I think society should try to encourage them in a positive way. For a long time they spent humongous efforts trying to marginalize those youngsters and force them into becoming hard criminals. I can’t understand that approach.”

Finally, the Multicoloured Dreams project has also been the target for some criticism from the so-called purist sector, those grafters who claim the nature of street art to be illegal, and asking for permissions and handing in sketches to be approved is far from its essence. However, Satu makes herself very clear regarding this point, “I don´t think we are taking anything away from the illegal painters. We haven’t had many old school graffiti artists taking part in our projects, but they are also very welcome. I believe that people need the possibility to make a difference to their surroundings, to leave a mark…to take the city streets for themselves away from the commercial companies“.