This is the first time I do a double film review in the same article, but well, I saw both movies Surrogates and Gamer one after the other, and at some points I felt like watching the same movie. Gerard Butler could have perfectly suit the role of Bruce Willis, and Willis, maybe a bit younger, could have been on the shoes of Butler with no problem.

It must be a trend in Hollywood that they release movies with similar patterns and topics at the same time. If before they did it with catastrophe movies, this time they play with virtual reality. New technologies have arrived to our everyday lives, and obviously the scriptwriters and directors are aware of that.

Surrogates is a good sci-fi movie, but it falls into a melting pot of all the classics of the genre. It is easy to see too many winks here and there to Blade Runner or I-Robot for just putting a couple of clear examples. The film is nonetheless saved by Willis, against fitting like a glove in a solitary character that goes beyond the borders to clarify the truth of some mysterious murders in a society where the real human beings just stay in bed leading mentally their surrogated robots. It could still have been more fruitful to see more interaction between real men and surrogates, the plot could have developed into much more funnier and interesting dialogues and situations with somebody who could pull the strings there. Director Jonathan Mostow failed in that. 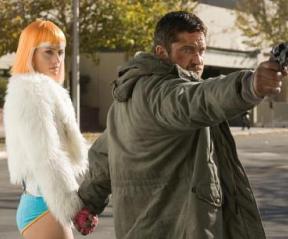 Gamer is more a shoot`em up movie which ending can certainly be foreseen miles away. But Butler is always good as a tough guy, although the script falls into too simplistic, and does not develop much the secondary characters. A pity, because it could have had more potential if it was not focused about the typical story of good guy meeting at the end the bad guy for the final duel and recovering the chick…
All in all, both are good entertaining for a couple of hours, but I still think that virtual reality and new technologies can deserve a much better sci-fi product in the future. Let´s see if any director out there is able to bring it (ah ok, for one second I forgot about Avatar… ;) )

The worst: A cocktail of sci-fi stereotypes that leaves the film with not much to create a self impression on the audience.

The detail: I just wonder if there would be enough room in a big city or in the world for double size of citizens, the real human beings and the surrogates in the streets…

The best: John Leguizamo as Freek

The worst: At some point, it reminded me too much of Death Race…

The detail: Milo Ventimiglia from the TV series Heroes makes a short but funny appearance in the virtual world.