In 1999 you moved to Japan, why did you choose this country?

I've always been interested in Japan. I started training ninjutsu in 1990 and since then it has had a very important meaning in my whole life. In 1999 I had the opportunity to move to Tokyo and study the animation process in the studios responsible for Ghost in the Shell. It was a turning point in my life because I even met my wife there!

Oni Kudaki is a collaboration with your wife and that makes it the first Finnish-Japanese comic production. How was it?

Of course, she was a very good assistant. She helped me be very precise with details. I wanted to do a historical story, but the plot is fiction and the details are accurate, just like the real 16th century Japan. It's not only fantasy, as I did a lot of background research since 2000.The idea had already been in my mind for quite some time. The time spent in Japan gave the final kick: all the experiences about Japanese culture, people, nature, training… I think all of that has had a strong impact, that without it Oni Kudaki wouldn't have been possible.

Music is a big part of your life. You studied classical guitar for more than ten years. How would the soundtrack of Oni Kudaki be? 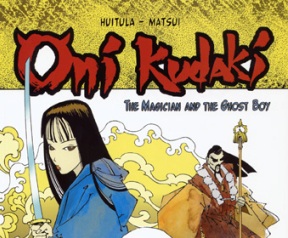 It wouldn't be too modern. There would be lot of ambience to get a mysterious feeling. It would be a bit spooky music, indeed.

A couple of years ago Kristian Huitula received great acclaim because of his adaptation of the legendary Kalevala. It is the first and only comic adaptation of the Finnish national epic and it has been translated to English and Russian.

How was this idea developed?

It's hard to say. When I read it at school I didn't hate it. I didn't have any traumas as most of the children at the time, although I didn't become a Kalevala freak. Some parts got stuck in my mind.

What was the most difficult part of adapting this epic?

It is such a long story that I wasn't sure if it would work as a comic. Editing was the hardest part: how to tell the 50 runes of the Kalevala in less than 200 pages.

Do you find any similarities between Finnish and Japanese legends and myths?

Sure. For example, there is a certain mystic sense of nature that strongly links both. The shamanism that has obviously a specific importance in Kalevala, is very closely connected with nature and all the different “gods and spirits” inhabiting the nature and the forests. On the other hand, the Japanese Shinto religion and its gods and spirits (Kami) which are present in all Japanese legends, is also related to natural elements, sacred trees and mountains, for example. Those nature spirits have quite an important role in the stories of both Kalevala and the old Japanese legends. They are important characters that get involved with the people's activities, and also make the story move on.

Oni Kudaki – The Magician and the Ghost Boy is published in the English language.