When sculpture and architecture dialogue

It is said that the Finnish architect Viljo Revell considered his buildings to be complete only when a Henry Moore sculpture was part of them. And all year round visitors can admire the Reclining figure on a pedestal by H. Moore at Villa Didrichsen, designed by V. Revell. But from the 9th of February visitors of the Villa Didrichsen are also able to admire an interesting selection of works by the renowned 20th century British sculptor, collected in the exhibition The challenge of architecture. 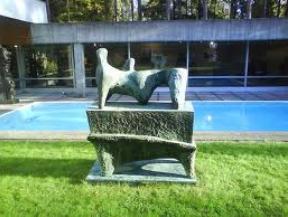 As the title clearly states, the focus is entirely on those sculptures that are either placed in architectural settings or somehow connected with architecture. On display are, among the others, masterpieces like the Archer, that Moore sculpted in white marble, and subsequently used as a model for the sculpture with the same name placed in Nathan Phillips square in Toronto, facing Revell’s City Hall; the working model for the Hill Arches, placed in 1973 in front of Fischer von Erlach’s Karlskirche in Wien; the working model for Three piece n. 3: vertebrae, now gracing the plaza of Dallas city hall (project by I.M. Pei).

The relationship between architecture and sculpture is explored in different facets: part of the exhibition is devoted to Moore sculptures and the architectural settings they are placed in. Another section is more intimate, the sculptures being placed in the part of the villa the Didrichsen used to live in. Here the visitor can see how harmonious and surprising is the interplay between, for instance, Square form with cut, whose enlarged version was on display in Florence at the Forte Belvedere in 1971, and the villa itself. Anita Feldman, the curator of the exhibition and of the Henry Moore Foundation, explain that after considering for a while whether to place this particular piece in the Villa’s garden, she opted for putting it inside, under a huge skylight, the opening on the villa’s ceiling echoing the one in the sculpture. Ms Feldman also points out the architectural quality of most of Moore’s works: of course you can walk around them, but most of the time you can actually walk through them, as if they were proper architectural spaces, with their lights and inner and outer spaces. 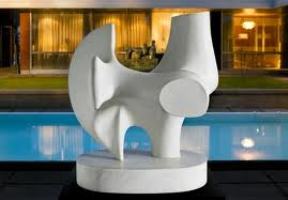 It’s therefore quite interesting to get to know how the collaboration between the architects – Revell, Pei but also Marcel Breur – and Moore developed. Moore didn’t work on commission: it was rather the architect who visited the sculptor studio and was somehow left to choose among already existing sculptures what would suit the architecture he had in mind, somewhat reversing the connection/relation between architecture and sculpture.

The exhibition is a great occasion to get acquainted with the work of one of the greatest 20th century artists. Or, for those who are already familiar with his work, to discover a new dimension to his art: the ability “to dialogue with intimate domestic spaces” that Mary Moore, the sculptor’s daughter, is pleased to highlight.