Håkan Nesser is a capital name in contemporary Swedish literature. Having won three times the Swedish Award for best Crime Novel, he is one of the Nordic writers better known around the world with his books having been translated to many different other languages. FREE! Magazine could not let escape the opportunity to get to know better the man behind those fictional crime scenes.

He turns out to be a very friendly person on our conversation on the phone while he spends his holidays in his native country, Sweden, away from London, the city where he resides for the last 4 years.
A man who feels relaxed and contempt about what he does but has not lost curiosity about the world around him, we spent quite a lot of time chatting on the phone with him about life in Finland, the autumn he spent in Spain around Torremolinos area in the late 90s, soccer… and of course about literature and his books. The Swedish author was in fact enjoying his summer holidays back in Sweden, spending some time in his native country before going back to London.

“Yes, I have been living in United Kingdom for around 4 years, so I spend the summer in Sweden and go back to Sweden around October-November. But I will move back to Sweden in January. Before we lived in New York for 3 years and we wanted to stay in the United States. My wife is a doctor but she could not find a job there, it is complicated for a doctor to find a job there, so we decided to move to London. So we have been abroad for 6 years and we thought that it was about time to get back home.” Nesser tells us. 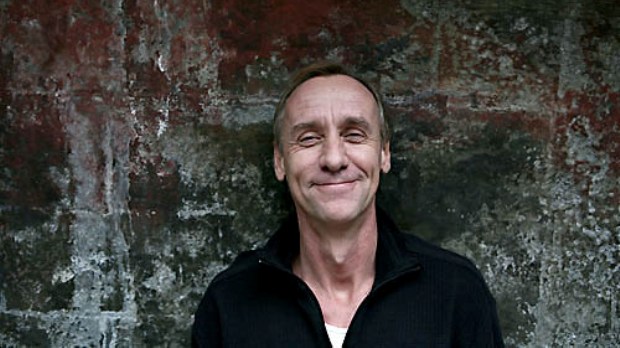 I recently read your latest book translated into English, “Hour of the Wolf”, but in fact it originally was written by you in Swedish 13 years ago. Does it annoy you to have to answer to questions about books that you wrote more than a decade ago?

Well, that is the way it works. The problem is that sometimes when they ask me things like “why this character did this in chapter 26” I do not remember anymore, I had a reason when I wrote it but I do not remember the reason years later. I read the book in English when it was out so I can remember the main things, but well, I have written 15 books after that.

In this book the character Van Veeteren is retired and steps a bit outside the investigation. For readers like me who have not had the chance to read the next ones in English because they have not been published the translations yet, in what direction will the character develop?

There are 10 books about Van Veeteren. This is number 7. The idea was to write 10 books, so he starts out as police officer in the first 5 books and then he changes and he buys this antiquaries shop, so in the last 5 books he is working as an antiquarian. In this case he gets much involved in the book because his son was killed, but well, the idea was to give more room to the other police officers in the team.

So you did not want to focus on the main character like many other sagas do, so this would be more of a collective focus on the other characters?

“I think I still have 2 or 3 books in me to publish, and then I am done as a writer”

A feature I noticed in general in other books that I read written by you is that there is not this hard line separating the good and the bad guys. The criminals are treated in quite a condescending way. Do you think that depending on the circumstances in life, every person could be a potential criminal?

Given the right circumstances, almost everybody could become a murderer. We need to realize that we have the same psychology as the murderer, we are all human beings. We might be lacking the circumstance that you need to make a choice, but it could happen that life could put you in a circumstance where you would need to kill somebody. I want for the reader as for myself to have an understanding of the criminal, the same you can mirror with the psychology of a police officer, you can mirror with the psychology of a murderer. It gives a humanistic touch to it.

Before becoming a full time writer you worked as a teacher, right? When and why did you decide to quit that career to dedicate your efforts just fully to your books?

Well, it took a lot of time. I started with the books quite late actually, I was 40 when my first book came out and then they started selling and they were translated into other languages, which meant that I had to travel abroad, meet other writers, etc. It took quite a long time for the writing. For a number of years in the 90s I did both activities, I worked half time as a teacher, but then I realized that it was time to get out of school. But I enjoyed being a teacher. But I think unfortunately you are a better teacher when you are younger, because you have more energy. If you teach for 40 years, probably you are better in the first 20 years. At least you have to change techniques to teach. I was a teacher until I was 48 and enjoyed it, but if you have a chance in your life to do different things, you should take them, no need to do the same for all your life.

And since you mentioned about your books when started to be popular and appeared in different countries around the globe, do you think you would have had the motivation to keep on writing if success would not have knocked at your door?

I am not sure, I was quite old when my books became popular. It could be complicated if you are young and then you had immediate success, but I realized that this is very random, I was lucky to be on the right spot and then people seem to like my books. Shit happens… and goo shit happens too! I was lucky but you have to realize that I am just a writer, there are better writers and definitely also worse writers. I am used to it and it is not really so big thing for me to realize that my books are sold everywhere.

If I am not mistaken, actually crime novels were not the kind of genre you wanted to focus on when you started right? So how did this happen?

To me it is not important if it is a crime story or another kind of story… what it is important is that it is a good story, a story that I would like to read myself. I must have written around 25 books and maybe 15 of them are crime fiction, the rest are something different, sometimes they even cross genre so they can be crime fiction and general fiction at the same time so as far as you tell a good story, that you call it a crime story is not important for me. But I think this year will be written my last crime story, because I have this other series with Barbarotti so after the last book of this series, I will not write more crime fiction. There are more crime writers in Sweden as you may have noticed…

Yes, people always talk about the “Nordic Crime Writers”, but I think you do not like much this stereotype of putting all of them in the same basket…

But do you think that subconsciously the place where you live can affect the writing style? Like for example here in Finland it seems to affect the music styles with a lot of heavy metal bands popping out of every bush.

Well, I think that is what people outside thing, that we live in gloomy places, in cold climate, etc. When I lived in New York, the only Swedish person they knew there was Ingmar Bergman, the film director. If you see a character from a Berman´s film, where they do not talk much, everybody seems to be suicidal and depressed, etc this is almost the ideal character for a crime story. Somebody does something wrong at you and then you wait for 20 years to take revenge… When people buy the books in different countries, they like the stereotypes, so I mean, when I comes to selling books, it is good, but Scandinavian crime is so different… If you take Leena Lehtolainen in Finland, if you take Stieg Larsson… we are totally different. In Swedish if you take me and for example Henning Mankell the only common thing is that we write in Swedish.

“The character of Van Veeteren is a bit of a mystery to everyone, even to me”

Well, there is no need to get rid of them but the point is that at least in United Kingdom, journalists try always to find what is the “secret” of Nordic crime novel. I always say there is no secret, there are different good writers but we write differently. Writing is a very complicated process and you have to weight and choose every word, there is not simple solution for writing a novel.

You mentioned before you are not planning on writing more crime novels, so do you have any idea in mind of what would you like to write next?

I am not sure; I think I have 2 or 3 more stories in me. The thing is that you should try to write a book that you feel that it is so good that you wanted to read it yourself, so you do not repeat yourself and every time you need to find a new story, so this becomes more and more complicated, but I know that I have 2 or 3 books more in me, and then I am done!

And then time for holidays and relax in Spain again!

How would you compare the character of inspector Van Veeteren with Inspector Barbarotti, the two key figures of your two sagas? What differences and similarities do they have?

First of all, Barbarotti has an Italian name but he is Swedish, so he had an Italian father. The action happens in Sweden and he is younger, at least 15-20 years younger than Van Veeteren. He has more of these latino features, if he is angry, he acts different and it is easier for the readers to identify with Barbarotti. Van Veeteren is a bit of a mystery to everyone, even to me. But Barbarotti is more “normal”.

What do you enjoy doing when you are not writing?

I travel a lot; also the books take me everywhere because I am published in 30 countries, so I am always travelling. My kids are grownups so I and my wife travel a lot, but we have dogs and it is complicated to travel with dogs, reading of course, and also I like listening to music and sports. I love soccer. Sadly Finland was not in the European Cup.

And with a little more of great chat off the record about football scene in Spain, Finland, Sweden and England, we said goodbye to Nesser, a truly gentleman and a great down to earth person to talk about literature and many other contemporary topics. Big thanks to him for finding some time during his holidays to attend our questions!