If last year we saw Benicio del Toro as Che Guevara, now French director Olivier Assayas brings us the story of one of the most wanted fighters (for others he would be called just terrorist), the Venezuelan Illich Ramírez Sanchez aka Carlos The Jackal.

The movie certainly hooks you up from the beginning. Edgard Ramirez as Carlos gives a great perfomance that exhales a similar aura than the real Carlos should must have had: he can be charming, but also dangerous and merciless when an idea is placed inside his head besides narcissist. 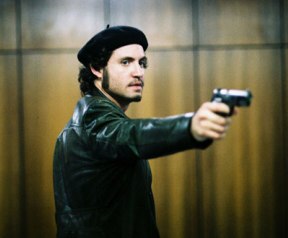 Assayas gives a great portrait of the difficult political board between East and West in the 70s and 80s, as well as how the character of Carlos develops into a shadow of what he used to be with the age and the alcohol; a person lost in older years while the world keeps changing around him.

Although you cannot take all what happens in the movie as true history, Carlos is a good entertainment to understand some important times or our recent history.

The worst: Rythm goes up and down too much, maybe some scenes could have been deleted to make the film a bit shorter.

The detail: The real Carlos, who is nowadays in a prison in France, got to read the script of this movie and had quite oppose opinions against it.