Posted October 10th, 2007 / By John Pagni in Outside Finland, Travel

In the south east of the country that has one foot in Europe and the rest of its body in Asia, lies a peninsular that has history and memorable panoramas in equal measure. The Anatolian coastline here is dotted with coves and bays, sites of picture-book villages, resort towns and property
development. Seek and you will find a your spot.

Let’s call this whole area Bodrum after its main town. However, it’s immediately apparent that it doesn’t look traditionally Turkish. That’s because it isn’t – it’s been part of various empires since the 13th Century BC and was called Halikarnossos for centuries. Claims to fame are the birthplace of Hedorotos (‘Father of History’) and site of one of the original Seven Wonders of the World: the 3,000-year old last resting place of King Mausolus (from where the word mausoleum derives). This was ruined after a 1303 earthquake, but still worth seeing for history buffs. 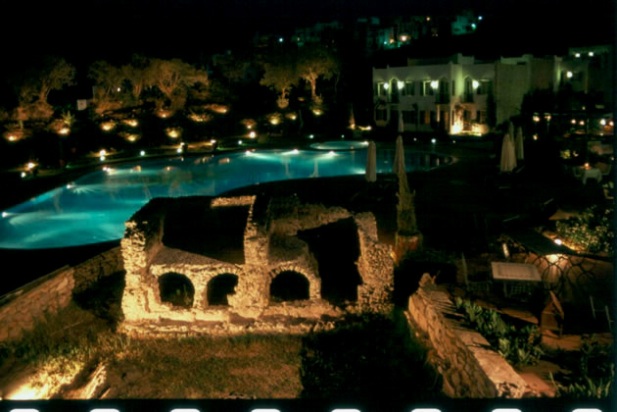 From the Amphitheatre cut in the hillside, a Greco-Roman joint venture, there’s a magnificent view of the town, dominated by the 15th Century St Peter’s Castle built by The Knights of St John – sacrilegiously using stone from the mausoleum. This early example of recycling has proved durable, acting as a bastion of Christianity against heathen hordes and a testament to its German architect Heinrich Hegelholt.

The fortress contains the English, Spanish, French and Italian towers constructed and occupied by noble chevaliers from those countries witnessed by the 265 coats of arms carved in stone. Pious and devout they may have been, but still unwelcome occupiers and were driven out by Ottoman Sultan Suleyman the Magnificent in 1523. A French battleship bombarded the castle in 1915 believing there was artillery inside. The damage was repaired by 1963 illustrating how time stretches here.

It’s home to the Underwater Archeology Museum with exhibits of Bronze Age ships, cargoes, seafarers’ lives – and a video for those who prefer a compact glimpse. Of interest to female visitors is the nearby hall containing the model of Carian Queen Ada with copies of her, her clothes and restored
jewellery of finely worked gold.

Although historical sites abound, let’s finish with the Myndos Gate – the last remnant of the ancient city’s outer wall through which a triumphant Alexander the Great entered in 334BC. However, he was so ragged off by the stiff resistance, he ordered the city to be sacked, but spared the citizens
(and the Mausoleum) in a typical Alexandrian act.

Enough of the past, most visitors nowadays go to lie and fry in the sun, of which there’s no shortage and/or enjoy the waterspouts. Offshore is a yachting (sailors can admire the local wooden yachts or gulat) and wind surfers’ paradise: the wind blows strongly and continuously, speeding craft and surfers alike over the water – and providing beach bums with a cool breeze.

Nearly half of holidaymakers reside in ‘all-inclusive’ hotels which have their own beachfront, boats and other playthings. This eliminates money changing hands and the local habit of hassling passers-by to eat at their restaurant and haggling prices. But convenience dulls the adventurous spirit, so it’s a choice that should be weighed carefully.

Experience gave the impression that the in-your-face marketing is less annoying than elsewhere in this country where it’s a way of life. For the bargain hunter and incurable dealer, a 30-minute negotiation (or hours sometimes) is ensured in a carpet shop or at a textile market where famous brand knock-offs can be had for around €10.

So what is there after a hard day’s lolling around on the beach or doing something in the sea? Hiring a car widens the options or taking a taxi (after setting the fare first) to visit one of the little waterfront gems like Bitez, Gümüslük, Gündogan and Ortakent-Yahşi or the bigger spots Yalikavak, Gümbet and Turgutreis.

A dinner at one of these places nearby or overlooking the water watching the sunset is guaranteed to raise the romantic temperature or chill-out the stressed. The area boasts of its seafood (not cheap), lamb dishes
(cheaper) as well as fresh local fruit and vegetables (cheap and tasty). Once again the Greek influence is noticeable: hors d’oeuvres-type entrées, ‘meze’ dishes, feature chickpeas, aubergine, tomatoes and onions stewed or diced together with the region’s silky light olive oil.

A local speciality, kabak çiçeği dolmasi, combines unique appearance with taste. Its exoticness comes from the use of unusual ingredients; courgette flowers stuffed with rice, nuts and herbs. 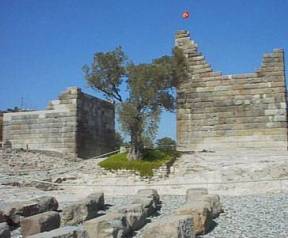 And the drinks list must start with a raki – the Turkish aniseed aperitif that hits the spot even if you don’t know where that is. After a couple, you won’t care anyway. With a meal the local reds are a mixed lot: from rough to ready, but light on the wallet at least, if not the palate. Turkish beer is an acquired taste, which I didn’t. Two will do.

If you are young or think you are, the nightlife can match the local wildlife. But if this includes clubbing, be prepared to cough up wads of notes. The main club in Bodrum takes its name from its Greek predecessor and it is obviously intended for noble patricians to hob-nob together as the prices appear (minimum €13 and up for anything) designed to keep the plebs out.

The door gorillas are ably supported by airport security equipment, which made me think who goes there and with what purpose in mind. A local waterside watering hole will serve much the same purpose without waking the dead and looking like a tacky unfinished film set.

What to bring back from your trip can take some of the pleasure away from a trip. After all, if someone wants something, they can always go there themselves. Every town, but thankfully not the smaller spots, has markets and shops heaving with tat, claptrap and useless ‘objets d’arts’. Buy at your peril, as some of it may not last the journey back to the hotel, never mind home.

Textiles are a cheap memento and kids’ stuff especially as the little darling won’t be able to fit in it for long. For the discerning, pistachios are a must, the local herbs, honey and halva too. The olive oil comes in airport baggage-handler-proof metal drums and bars of olive soap with amazing skincare
claims are ideal as ladies’ gifts. Just potato cooked in the oil tasted exquisite and all soap cleans if not cures.

Much of the southern and western coastline overlooks islands, of which many are Greek. The one within touching distance twinkling the most lights off the south coast is Kos. Tensions between the two old rivals have lessened to the point that day-trips between Bodrum and Kos towns are possible by small ship or fast hydrofoil taking 20-60 minutes.

It operates on an exchange system: as it is usually for a day, Turkish operators provide the service one day and their Greek colleagues the next. This alternating system seems to work perfectly, but those travelling by slow ferry appeared more barbecued than the cooler-lookers on the faster mode.

So the options before travel are many: which resort and what lifestyle you want. Whether to rummage round Greek, Roman, Persian and other civilizations sites or lounge around or be active on, in or under the Med.
All-inclusive, B&B or a mixture? The alternatives are there: