What can a girl band do with a name about alcohol tolerance, lyrics about game consoles and a stage image full of masks and costumes? Well, just becoming the most popular band of the moment. With a funny mix of rock, garage and crazy lyrics Pintandwefall will surprise you. Guitar player and vocalist Dumb Pint tells about the band and its first album: Wow! What Was That, Baby?

What is the story of the band? How did you come up with such a name?

In the spring of 2006 after another rock band’s rehearsals, I was in a bar and I had the idea of starting a girl band which would play one gig in an school competition. The idea was that everybody would play an instrument which one would have never played.

Next day at school I was asking my friends to join me. We took the name of the band from a poor joke which was about bad tolerance of alcohol and we learned two songs in three weeks. To our wonder everybody liked us! The original plan was that we would have broken up because of musical disagreements, but because of getting extra gigs we couldn’t stop and we had to write more songs.

What about your looks and style: the masks and the names?

Image has always been important to us! Already in the first rehearsals we were planning what type of nail polish and shade of lip stick we should use. The costumes were supposed to match with each other.

In the beginning instead of masks we had huge sunglasses, but then before one gig we went to a joke shop to buy a diabolo for Cute Pint, who plays percussion and sings. At the same time we found these great disguises. We had an idea to wear them to the night’s gig and finally they kind of came our dominating element on the stage by accident. Nowadays audience would complain if we didn’t wear our masks.

We wanted also very stupid Spice Girls -type of artistic names. We should have thought them a bit better if we had known that this will go this far…

You have pretty original and funny lyrics? How do you find inspiration for them or topics like X-Box?

We don’t have any limits, so we write songs about almost any kinds of topics which inspire us. X-box had a bit different story though; the song had originally really dirty lyrics which we had to change to be called as a “family version”.

Your album is becoming very popular, how do you feel with these sudden success?

It feels really absurd! Even though since the beginning there has been small fuss around the band which has grown into new potential during the time. It’s wonderful that people like us so much!

Tell me a bit about your influences.

Since there are four song writers in the band, we are mixing everybody’s personal favorites that can be anything from Toto to The Hives. We haven’t found any great influence yet, though the reporters have invented things to compare to us. 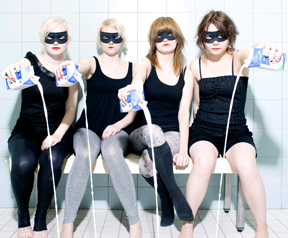 For someone who hasn’t listened to your album or seen your shows, how would you describe your music?

It’s direct, spontaneous, dangerously sticking, wild and conquering. Even if our playing skills are not like diamond sharp, we compensate the lack of virtuosity with an intensive atmosphere and good stage show.

What is your favourite places / bars to play and to hang around in Helsinki?

So far we like as costumer and as players, places like Belly and Kuudes Linja. And we go to sing karaoke in Sweng!