Based on the popular book series, here comes the cinema adaptation of what tries to be one of the English teenage comedies of the year.

After reading some other reviews from viewers and critics in Internet, I am not sure if it is me that I am getting older and grumpier, or that the watchers swallow whatever product they see on screen. Because this must be one of the worst movies I have seen during the last year. I actually was not expecting much (maybe because I am a man, so usually I find funnier jokes and the sense of humor when the main characters of the teenage comedies are also male, what can I do…) and at the end of the movie, sadly I realized I was right. 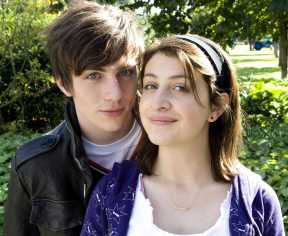 I expect from a teenage comedy to have some irreverent moment, but here all that you find is some female teenagers that find the most risky moment of their lives between wearing thongs or normal underwear. What an excitement! Even if I would have a teenage daughter, that I do not have, I would not see the reason why she should see a gang of teenage girls acting like if they would be 8 years old. Not mentioning that is far away from the reality, how many of you had your parents renting a super luxury club for your birthday when you were 15 years old? Not only that the acting is bad, but also the scriptwriters made things worse: the character or Peter, which is probably one of the few ones that could be saved and turn a bit funny, is hardly used in the plot. And so on so on.

Honestly, maybe some teenage girls will enjoy watching this, if they can feel identified in the middle of the hormonal storm that the British girls seem to be immersed. For the rest of spectators who consider they having a bit of a brain, skip this one. A total waste of time.

The best: Peter, the “saliva kisser”.

The worst: Do not get me started…

The detail: In the books, Robbie is the singer of the band, not the bass play.