After seeing the legendary Australian AC/DC taking the stage at Kantola Event Park in Hämeenlinna last summer, it was again time to organize for second time a huge 1 day concert in this town, located around one hour away from Helsinki, with British metal icons Iron Maiden visiting Finland again as part of their Book of Souls World Tour.

First of all, kudos have to be given to the organizers LiveNation for improving significantly the logistics and organization of the event: the venue had considerably less assistants than last year, but in some way that helped to improve the general feeling around. A great selection of food trucks providing the visitors with a wide choice not to starve, cigarettes for sale, the drinking area considerably big and much closer to the scenario than last year and without having to wait one hour to order a liquid beverage, portable toilets also abundant and easily accessible, the path to reach the main gate less crowded and a lot of improvised bars around the park so you could stop for a drink in your way in and out of the concert.

Even the transportation improved. Although there was only one train available to go back to Helsinki after the show and was sold out, this time Express Bus company arranged efficiently many buses at 01:00 so everybody who wanted to come back to their home places could do it on due time. 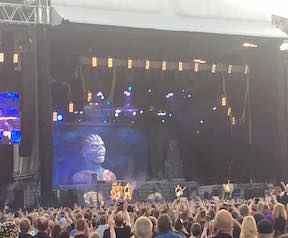 If we add to all this that the weather was nicely warm and sunny, you have the perfect cocktail for a successful day of good metal music. And the offer was wide, apart from Iron Maiden finishing the night, before the spectators had another British, The Raven Age, the legendary local Finnish metal band Stratovarius and the Swedish Sabaton opening up.

As yours truly is a hard worker and takes a while to arrive to Hämeenlinna from Helsinki, I could only see the end of Sabaton’s gig. The Swedish visit the neighboring capital quite often, as they already gave a solid show last year at Tuska festival, and know very well how to please the Finnish audience.

Around one hour later, Iron Maiden took the stage. This would be my fifth time seeing them, the fourth time in Finland after having assisted to their concerts at Sonicsphere in Pori, at Ratina Stadium in Tampere and at the Olympic Stadium in Helsinki.

As positive things of their show, the balance between new songs from their last album Book of Souls and the old classics was perfect. It helped that actually the last album has a very acceptable quality. After a first leg of the show concentrating on their last release, the last part focused on some of their old anthems. A few nice surprises like Powerslave and for my own surprise, to feel that my favorite song of the night was Blood Brothers, with a final part of guitar riffs that gave me goose bumps. It was probably the best song of the night together with Hallowed by the Name. Another pleasant surprise was that for a change, the show was not ended with 2 Minutes to Midnight but with Wasted Years.

The negative thing: the quality of Dickinson’s micro was awful. A lot of problems with the audio so his voice was continuously getting overlapped by the guitars every few seconds. A redundant problem that, although it seemed to improve a bit after The Trooper, was repeatedly suffered all over the show. 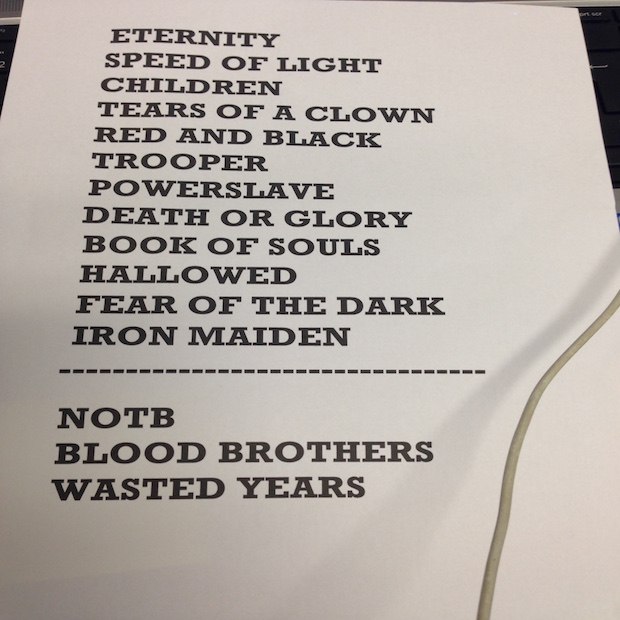 In any case, the fans seem gladly to forgive that, counterbalanced by a good setlist, Dickinson always amusing when addressing the audience and the typical great visual paraphernalia that accompanies every Iron Maiden gig with Eddie the monster fighting against Dickinson, huge inflatable monsters, the guitar players running around the stage and Janick Gers throwing it into the air and some of the best designed t-shirts in the heavy metal universe that you could purchase for a decent price in any merchandising shop around the venue.

Everybody left happy and in high spirits, and even when being a Wednesday night, that did not stop many Finnish metal heads from also leaving quite drunk (remember, it was a sunny summer day in Finland so cans of beers were blossoming in every corner of the parks of the city). Already looking forward to seeing who will come next summer to Kantola Event Park to delight us once more with good rock and metal!