Confessions of a Shopaholic

Do you like going Shopping? You cannot enter in one mall without buying something? Well, watch out that your credit cards do not get on fire! 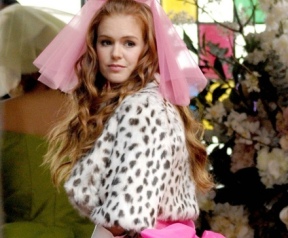 Confessions of a Shopaholic is a romantic comedy aimed mainly at girls. Let’s be honest, although many men (me included) like shopping clothes, we all have a short limit of resistance to a period of stay in a shop. After a usual quick decision, we prefer to hit on a bar or sit on the sofa watching sports. For women, it is a way of life. The movie directed by P.J. Hogan is fun to watch, but that is basically it. Isla Fisher is actually very sensual and suitable in her role of shallow posh girl obsessed with Gucci and Prada, and Hugh Dancy as Luke Brandon plays his part as the British journalist who is both honest and a good catch. The dialogues have some good humor inserted from time to time (pay attention to the appearance and references to Finland all over the film), but the end is predictable.

Another romantic comedy in New York, where all can happen… according to Hollywood. For the rest of the journalists with feet on the earth, we will continue writing reviews and features with the hope that one day we can find that inspiring green scarf that will lead us to success!

The best: The sensuality of Isla, looking like the forbidden neighbor of the fifth floor.

The worst: The final is too predictable and lacks of innovative ideas.

The detail: The characters really speak Finnish language in the movie, although Isla`s accent makes it almost understandable during the final credits.

Confessions of a Shopaholic Trailer

One Response to “Confessions of a Shopaholic”