This summer two new books about Helsinki were published. They are not the usual tourist guide. The Vice Guide to Helsinki and You Should Be Here! show a cheerful and modern city and discover its untold secrets. Timo Kühn, long time contributor of Vice Magazine, explains to FREE! how the Vice Guide was created.

Admittedly, Helsinki is tucked away in a dark, cloistered corner of Europe, emanating a
certain inaccessibility to the garden variety traveler. That is, if it gets any notice at all. Enter Vice Magazine, their Finnish contact, decade long Helsinki inhabitant, Timo Kühn, along with a handful of talented natives, and funding from the Helsinki city Tourist & Convention Bureau,
only after forewarning that the publication must have a free hand.  As to be expected of the notoriously
controversial publication, Helsinki, illuminated through the trademark humor of Vice Magazine, has created some dispute. As Kühn replies though, “when somebody gets stoked or somebody gets
upset, you’re doing something right.”

We wanted to have a different angle on the city,” Kühn expounds.  Indeed.
The opening article, From a Distance, is written by Helsinki’s adopted children, Dan Boeckner and Alexei Perry from the band the Handsome Furs. What does a foreigner see or think about Finland? Hackneyed, preconceived images of ice hockey and Alvar Aalto?  Fortunately no, rather something more along the lines of good people, art, music, and despite what some in those Mediterranean countries might think, the food is good too. Kühn says, “they fell in love with Helsinki so that’s what we could understand, why the city is amazing. You can’t tell what’s amazing when you live there every day.” 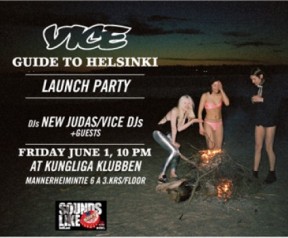 So rather than the run of the mill tours and landmarks found in a traditional Fodor’s or Lonely Planet book, Vice dishes the dirt on homegrown bands and local favorites. “We thought it would be better than telling more than one story,” Kühn says, “a guideline for finding your own fun. It depends on what kind of interests you have.” Drinking culture, as to be expected, is integral to Finnish life. Even still, “the Kallio piece tells a lot about Finnish mentality,” Kühn explains. There’s a lot more to it than “the harshness of Helsinki or nice bars, cool people.”

The work that went into the project highlights a lot of the surging talent in these parts that, due to
the generation gap, Kühn laments “never gets utilized.” The intricate map of Helsinki, illustrated by Vilunki 3000, known for his long standing in the music scene and talent for
album cover design, was put together in a shockingly tight six days. Photos from Pekka Niittyvirta, Oskari Nolla, Riku Pihlanto, Miika Saksi, Jan Konsin, Sanna Charles, Joe Yarmush, and Mikko Matias Ryhänen capture Helsinki’s varied landscapes, alternately industrial and beautiful, but mostly the young people driving it forward. As Kühn says, “you cannot underestimate the value of young people’s ideas. There’s a certain group who are talented, but no one gathering everything together to market outward, which is what I tried to do with the guide. Something is starting to bubble.

You Should Be Here!

To cater to Eurovision madness back in May, Bulgaria Magazine put out a comprehensive, sometimes tongue in cheek, guide to Helsinki, You Should Be Here! Though sadly not on as prominent display around town now as then despite the influx of tourists (i.e. people with money who almost guaranteed do not speak Finnish) in the summer time, You Should Be Here! remains a helpful resource even for those who live here year round.

Even if Helsinki appears to be a small city, cracking open this guide unlocks a wealth of places yet untapped and amusing cultural tidbits.  Perhaps you’ve been too lazy to explore your own neighborhood yourself, spending your time in the over-crowded, tourist attractions.

Maybe you’re the last person in town to not know Kallio is packed with bars, or you’ve been too overwhelmed by the choices to hit any of them up.  Or you want to deck yourself out in Finnish
fashion, but are bored of Marimekko. You Should Be Here! paints a new urban portrait for the city, or at least one from the perspective of what the talented youth of the city are making, breaking, and of course, drinking.  I, for one, was previously ignorant of the refreshing properties of fisu.

While Vice Magazine has put out on even more recently a pocket-sized guide to Helsinki, the Bulgaria book has the practical advantage of depth: more neighborhoods covered, shops, the karaoke taxi, even local history.  By virtue of being put out by Finland’s most offbeat design team, You Should Be Here! looks great as a coffee table book, completing your collection of Taschen, Rizzoli, and even color coordinates with the Phaidon Design Classic three volume set. Most importantly, You Should Be Here! serves as a reminder of why, indeed, we are here.