Believe me, there are not many sunday nights in Helsinki or any other Finnish city where you can hear people screaming all over the streets and cars honking. Tonight is one of those nights.

Finland has won the Ice Hockey World Cup 2011 a few minutes ago. And it has done it against their eternal rival and enemy: Sweden. The final score was an amazing 6-1 for the Finns!

There are not many things that Finns take totally serious, a country that is used to have their feet on the earth. Leaving the door of the sauna open is one. And Ice hockey, especially if it is a World Cup final against Sweden, is another. 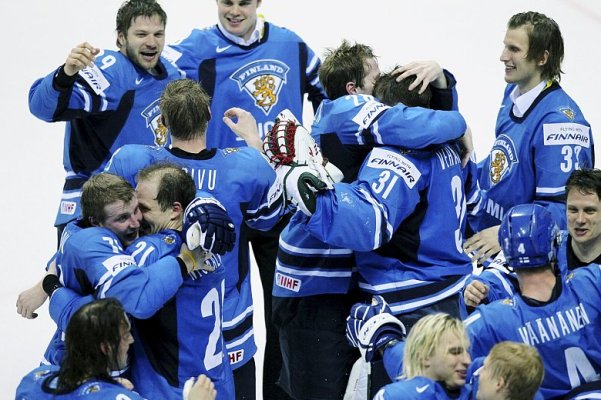 I put you an example, years ago I was in Madrid drinking with a group of Finnish friends, who invited a common friend, a player of the Finnish national team, Tommi Santala, who later went to play to USA and is nowadays playing in Switzerland. The evening went great until I mentioned the painful defeats of Finns agaisnt Sweden in ice hockey. A tense silence of 10 seconds took place, until my Finnish friend changed the topic of conversation and we made a brindis. Trust me, they were some of the longest 10 seconds of my life; you do not want to make angry a professional Finnish 120 kgs ice hockey player…

Although Russia is probably the most hated and feared country for the Finns for historical reasons, when it is about ice hockey, the public enemy is Sweden. Swedish are like those big brothers who dress better, get smarter grades at school and end up dating the girl you dream about. The exception to the rule was in 1995, when Finns were able to defeat the Swedes at home to be winners of the World Cup for first time in history… until now in 2011. 16 years in between with a long story of painful defeats against Sweden, to the point that most Finns had become totally fatalist when foreseeing a defeat against their Nordic neighbors.

This victory is a catharsis for the country. I know very well the feeling, last summer Spain experienced something similar being the winners of the football World Cup. I am sure that more than one worker is going to arrive late to the office tomorrow involved in deep celebrations at the local bars ;)

Congratulations Leijonat! You have finally showed that beating the Swedish at an ice hockey final is not just an exceptional event that happens once in the history!