The Nazi Germany has been the topic for thousands of movies during the recent years. Although usually depicted as evil, sometimes we have assisted to the more human side of German Nazis (if not, just look again at Oskar Schindler in The Schindler´s List).

Good is a movie just made to shape the talent of Viggo Mortensen. He fits perfectly a role of a person who can be intelligent, sensitive, but also tough if needed. One of the biggest questions that the humankind ask themselves when the concentration camps were discovered were “How this could happen?”. The movie tries to dig deeper in how good citizens can end up corrupted or assimilated to an evil system, but all in all, Good left me a bittersweet taste after I finished watching it. 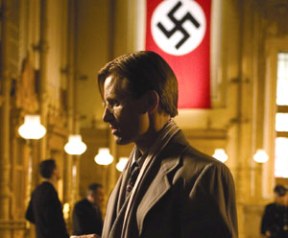 It is true that Mortensen´s work is once more flawless, but his relation with his Jewish best friend Maurice is portrayed sometimes in a too sloppy way. I basically enjoyed more the moments when Viggo tries to deal both with his shrinking marriage and her new love for a young student who turns to betray his confidence.

The final is certainly visually shocking, but you are not going to presence anything unique that you have not seen before in other movies or TV series dealing with the holocaust. I had the feeling that the movie was in the end too short, and the characters had to be sketched in a bit of a rush. Not a bad movie if you like Mortensen, but it will not enter the top list of films that deal with the Nazi German.

The best: The band playing classical music in the concentration camp in the final scene.

The worst: I had the feeling the movie would have needed an extra half an hour for exploding all the potential it had.

The detail: Mark Strong plays a secondary role as Bouhler.