Sacha Baron Cohen made a little revolution in the comedy genre with the exhilarating Borat. Who has not tried to imitate with their friends at some point Borat´s accent and expressions in the last years?

The “on your face” spontaneous and transgress sense of humor of Cohen goes even farther here in the portray of a gay Austrian reporter who is not afraid to confront anybody in the pursue of his dreams and gay happiness. 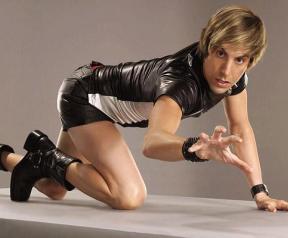 The product, nevertheless, is not as “fresh” as in Borat. Although changing the characters, the formula has too many repetitions, and the spectator is not caught in disbelief so easily, even when Cohen tries really hard. For many “alpha males”, this must be a difficult movie to watch, but certainly, if you watch it with an open minded, and you know the kind of humor that Cohen displays, it will provide you with a few good laughs. If you belong to a conservative family, maybe better skip this one.

I had watched some short videos of Cohen portraying the same character in Youtube, and I must admit that many of them were funnier than most parts of the movie. All in all, if you like the kind of humor that breaks all the rules about nudity, indecent behavior or male to male tongue kisses, this one will entertain you!

The best: The final “fight” in the UFC cage in front of an American redskin audience.

The worst: The formula copied in essence from Borat starts to be a bit rusty. Cohen needs to reinvent himself one more time.

The detail: Cohen was “kindly” escorted by security after breaking into a fashion show in Milan.