Stories of the backstage. Press passes are not candies.

From time to time, there is always some friend who knows that I work as editor and freelance journalist and I have the good luck to cover some great gigs and festivals, mainly in Finland, who asks me the same question: “Hey, and could you get me also a free press ticket?”

They tend to forget that press passes are not delivered like candies. Usually you (still) need to work as a journalist. You need to have arranged interviews or reviews of the events, and deliver the content once you assisted. Often you miss the best concerts in the festival while you are making your interviews in the backstage, far from where the action is happening, and for a person having a small publication like I have; many times even the editor in chief will end up with empty hands. Organization can have a limited number of press tickets, the artists themselves decide to give only to the big media, or simply they do not trust on you if they do not know you and you think you are just another of the millions of bloggers around. 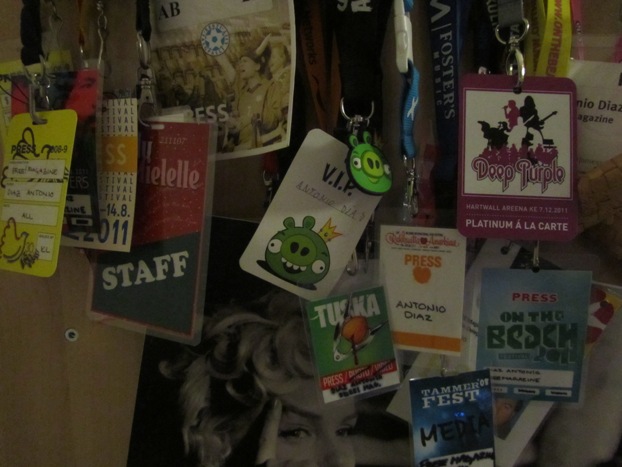 So no, press passes are not easy to get, they are not just a VIP free invitation delivered to your group of friends. Only a few times you can have the luck to count with a photographer to cover a concert with you, which on the other hand is nice if you go alone to a gig, because otherwise tends to be boring if you do not know anybody around and you are just waiting for your turn to make the interview.

So what can people expect in that mystified media area in the festivals of Finland, behind the fence, where only a few humans can have access under the gaze of the security guys? Well, most of the times… nothing special. Usually the journalist has to pay for the drinks at exactly the same price than outside the media area. Finland is a small country, so people who work in the media industry usually know each other and assist to the same concerts, clubs and parties. So most probably they will have a good time getting drunk together and remembering past battles and anecdotes while you sip your drink in a corner and from time to time they look at you wondering who the hell that foreigner is. On the other hand, if you have friends around, it can be fun. A few advantages is that usually you do not have to wait for long queues at the portable toilets and maybe you can order a drink faster than in the bar outside where the rest of the people queues for eternal minutes. Also if you are lucky, sometimes you can get some free merchandise like a free CD from some band performing.

And no, do not get mistaken again. The press pass that allows you to the media area is not the same than having an all area access pass. So you are not going to be mingling much with the artists, unless that they want to go out and drink with some friends who happen to be journalists or marketing people from their record company.

So as you see, on the other side of the fence, there is not so much glamour as you could expect ;not many wild stories of wild sex with groupies, drugs and tones of booze. That does not mean that sometimes cannot be fun. Artists are usually bored backstage before or after their concerts, so it has happened a few times than after the interview we would enjoy a great conversation and drinks together. I remember having quite too many drinks with the guys of Black Lips long time ago at Provinssirock, or how friendly and gentle Ginger (the leader of The Wildhearts and nowadays part of Michael Monroe´s band) was at the backstage at Rabarock in Estonia as well as how enjoyable was to talk to the Portuguese Moonspell during their visit to Tuska festival in Helsinki some years ago, or how I continued the night partying with the guys of Lovex after their gig in Tammerfest, especially with his great bass player Jason.

But still no, usually if you want crazy stories about rock bands and backstages, you`d better have to read some Neil Strauss´s books to find them. And no, I still will not get a free press pass for you!