Imagine Dragons live in concert in Helsinki at Hartwall Areena. 27.01.2016

Just a few years ago, if a rock band would introduce themselves to the audience playing in a big venue as coming from Las Vegas, Nevada, most of the people would have thought automatically of The Killers. But not anymore, Imagine Dragons, the young Americans from the city that never sleeps, have suffered a meteoric raise with just 2 studio albums released, Night Visions (2012) and Smoke + Mirrors (2015) that led them to appear in the capital of Finland for first time as show headers.

I was really curious to see them live also for first time ever, having heard so many good things about them, and not forgetting that if you are just a normal human being who watches movies, sees TV or play video games during the last 3 years, at some point you are going to recognize easily their 4 or 5 biggest hits once they start being played. 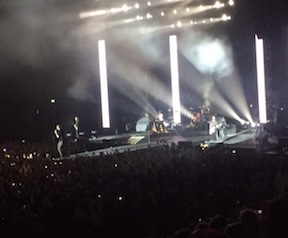 As other compromises did not allow me to check the opening band Rival Sons and just arrived to Hartwall Areena a few minutes before Imagine Dragons started, I cannot give an opinion about them. Around 15 minutes after 21 Imagine Dragons stepped onto the stage and from there on that was madness coming out of the throats of hundreds of fans that would turn crazy on every movement or wink that Dan Reynolds would dedicate them on stage.

The venue had around 3/4 of capacity fulfilled, which is not bad taking into account that the concert took place a Wednesday and the weather in Helsinki did not really invite to go out. As I said, a lot of female teenage fans among the audience, but also audience pretty mixed with all kind of ages and looks. I even saw myself sitting close to me an old couple in their sixties that were really thrilled with every song. And that seems to be the strong point of Imagine Dragons, although sometimes they may sound too edulcorated (there were moments in the show when I was really thinking that they sound as some kind of Black Keys for teens) and aimed at young fans, they do not overdo it and they have the enough amount of good doses of rock to reach a wider audience. The vibe is always positive, soft indie rock with touches of funk, electronic music, ska… Listening to them live automatically transports you mentally to a warmer place, like watching a sunset during a beach party.

Undoubtedly their vocalist Dan Reynolds is the one where most of the eyes are focused on. Dan looks in general like a good boy with a touch of hipster mischief, the kind of pal that you could share a smoke in the terrace of a bar or accept as the new girlfriend of your sister. But the same with their style, the band does not overdo that “cool pose” and that is something that makes the difference. They really seem honestly flattered with the chance given to play for bigger audiences, they are humble and grateful in their interaction with the public (Dan commented that “he was blushing” when some female shouted a spicy comment at him in the middle of the show) and they had the small detail after the show to stay a couple of minutes throwing guitar picks, drum sticks and greeting goodbye to the audience, small details that make the difference. 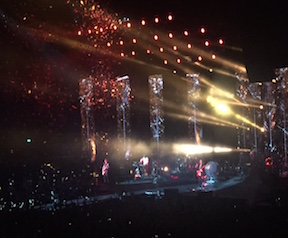 About the concert itself, the scenography was decent but nothing mind-blowing, the quality of the sound was ok taking into account that Hartwall Areena does not have the best acoustic eve for live shows and although I got a bit cold at the beginning, once they started to play hits like It’s time, I found myself rising from my seat dancing with the rest of the crowd. The big fireworks came at the end of the show when they linked anthems such as Demons, On Top of the World, I bet my Life and Radiactive with a very fun cherry on top of the cream as all the members were switching position onstage while hammering mercilessly big drums.

Things to improve? Maybe the setlist was a big short in general, and also the guitar solo Wayne Sermon did not provoke any special reaction on me (that could be cause once some months ago one sees a master as Joe Satriani, it is impossible then to measure with same standards). But all in all, I left the venue happily surprised and satisfied with a band that probably will have a lot to say in the indie rock scene during the last years. Not a bad plan to fight with positive energy and good music the gloomy cold weather of Helsinki.

On Top of the World

I Bet My Life