American fiction writer George R.R. Martin (Bayonne, 1948) can be considered a contemporary classic of the literature in science fiction and fantasy genres. Awarded with high distinctions like Nebula or Hugo awards, and consolidated as a bestseller’s author due to the widespread fame of his saga “The Song of Ice & Fire”, Martin also provokes high doses of anxiety and gossiping in fantasy literature communities and forums around the world due to the expectation for the last 3 books not published yet that will complete the total of 7; the fifth one “A Dance with Dragons” will probably hit the bookshops before the end of the year. 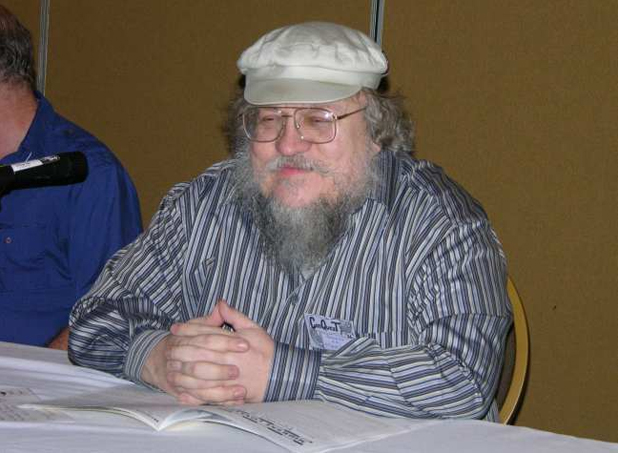 In an overcrowded room of a famous bookshop in Tallinn, filled with hundreds of fans, a talkative and friendly George R.R. Martin, accompanied by his wife Parris, answers all kind of questions that the Estonian readers shoot at him, from the sex scenes in his books and the morality of the American readers to his taste in literature. After more than 1 hour signing books to his loyal fans, we finally have the chance to talk about his visit to Finland and Estonia, his past as scriptwriter in Hollywood and of course about The Song of Ice & Fire!

Thank you for your time George. You were in Helsinki last week end and actually I know that when you were younger you wrote some stories about Suomenlinna…

Yeah, I wrote two stories about it, the fortress was called Sveaborg in past times and I wrote about the surrender to the Russians which was kind of a historical mystery, so I wrote a story in college, actually I was taking a course on Scandinavian history and I convinced the professor that I could write a piece of historical fiction.

And if I am not mistaken, you explain in your book Dreamsongs that actually the American-Scandinavian journal was the first one to reject you with those stories.

Yeah, but well, they rejected me “nicely”, so it was very encouraging, and I went on and 20 years later I dig it out and rewrote it and made it a science fiction story.

So why were you so interested about Scandinavian culture? What attracted you?

Well, it is not that I was particularly attracted. I was in college and taking history as a minor, and I took all about Western civilization and English history and American history, so I thought that I could take some history course I did not know anything from inside, and the whole thing was that Sveaborg caught my imagination, you know “the great fortress, support of the north… mysteriously surrenders to inferior forces…” Why? That caught my attention. 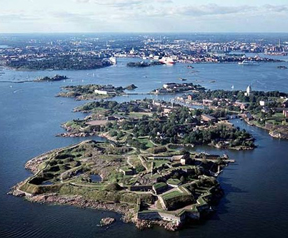 So you visited it?

Yes, we took a boat and spent a day there.

So it was like the idea you had in mind?

Actually, it was not like in my imagination. It was very pleasant; there was a park, trees and children playing, while in my stories all is very grim and military. In the story is middle winter and the bay is completely frozen, so it was very different from the story, but still, nice.

And here in Estonia, is this your first time?

Did you plan to come here beforehand, or just took advantage of the visit to Finland?

The Finns approached me 3 years ago. I schedule my calendar 3 years in advance and the Finns asked if I would be their guest at Finncon, so I agreed and put it at my website and a few months ago my Estonian publishers noticed that and asked if I could come to Estonia and do some signing. I must say I have had a great time here; I have got to meet all my Estonian readers, so that was a thrill!

During last year you were presenting the book “Songs of the Dying Earth”, an anthology tribute to Jack Vance, a book you have edited together with Gardner Dozois. What can you tell us about it?

Yeah, actually it is coming out right now, I have not seen a copy yet myself, but just before I left the publisher wrote me that he was picking copies from the printer and he would mail them to me, so they would be hitting the bookstores right now.

Your fans seem to be very focused on your advances with the Saga The Song of Ice & Fire. Do you receive many emails when you do this other projects about why you do not focus on the saga?

Yes, we do unfortunately. There are fans who are just interested in The Song of Ice & Fire and they do not want me doing anything else, but they are the small minority. The majority of my fans are very supportive, they write me wonderful letters so well, I like doing different things, you know, I love Ice & Fire and I am working on it and that is great, but you cannot do just one thing 24 hours a day, and I have a lot of interests: I like editing books, I like reading books, I like working with Gardner and of course I like Jack Vance and that book honors his magnificent career.

There has been confirmation that The Song of Ice & Fire will be turned into a TV series by HBO. Is true that you keep the right to write the script for one chapter a year?

Yes, it is true; I will write one script per year for the TV series.

You worked previously in Hollywood writing scripts for series. Are you excited having the chance to write scripts again?

No… I mean, I am looking forward to it, but I am not “that” excited about it… It will be more exciting when it gets produced. That will be fun!

I read that you were actually not that satisfied with your experience working in Hollywood. What didn’t you like there?

I was there for 10 years. The first 5 years I was in two shows, The Twilight Zone and Beauty and the Beast, and you know, I had my frustrations on those shows, but mostly it was quite satisfying, we did some good work, it was film, it was produced, it was broadcasted, people saw it… that was all good. But the second 5 years I reached a stage where I was doing “development”. I was developing ideas for shows on my own, and also doing featured films, doing movies, writing scripts and in that case, these things… you get paid a lot of money, more than working on a show, but they do not necessarily make anything. You write a movie, you re-write a movie, you spend 1 or 2 years working on it, and then they decide that they are not going to make the movie. Then you develop a pilot again, you spend 1 year on it, they film a pilot, they drop it, that happened to me once… maybe they do not make the pilot and read the script and say “well, this is good but we have this other show that we like better”. So after these years I had much more money, but emotionally it was very unfulfilling, it was very frustrating. I do not want to write a script, develop characters for 1 year and then nobody see them except a few executives in a room. So I wanted to be back to books where I know I had a real audience.

Is not weird that they will start the filming of the TV series, but still nobody knows the final for the Song of Ice & Fire (apart from you)? When they start to shoot the beginning, they do not even know how it ends…

Yeah, sure they don’t. I am going to be wasting them! Well, they are going to do 7 seasons and I am doing 7 books. They are going to do a season a year, but it is taking me 2-3 years or sometimes more to wreck these books, so I don’t know, hopefully I can finish the 7 books before they get to the seventh season! Hehehe…

HBO did also the series “Rome“, that you mentioned earlier that you love it.

There is a lot of political intrigue there, the same that in your saga of The Song of Ice & Fire. Do you feel especially interested by power games?

Yeah, I find that entertaining and kind of stuff I love to write about and love to watch on TV. Rome was a wonderful series at every level. It was gorgeous to look at, the acting was superb, and the writing was superb, so hopefully Ice & Fire can be as good. 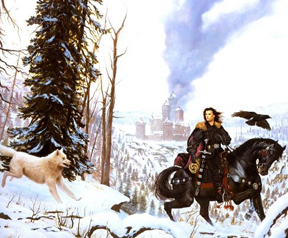 When you read The Song of Ice & Fire and you read The Lord of The Rings, I find some similarities in the way they display worlds in decay: the last dragons, the elves leaving Middle Earth, the magic getting lost… the reminiscences of a more splendid past. Are more intriguing these periods when things are getting lost to write about?

I have a certain attraction towards twilights. You can see that in my work, if you read my first novel “Dying of the Light“. There is something about it that it is very evocative to me, the twilight world, and the world between the edges. Maybe there is something about me psychologically, I don&’t know! Hehehe…

It was recently published in your website that there will be soon a videogame about the Ice & Fire saga.

Yes, a French company called Cyanide got the rights to make 2 videogames, a real time strategy videogame and a role videogame, so I am going to be meeting with them in Montreal in a couple of weeks, the project is still at very early stages.

Do you play videogames?

I play occasionally, I would not say I am a big videogamer by any means, but I play some, especially real time strategy games, I like strategy games.

The one dollar million question that most of the fans are wondering around the world: How is Dance of Dragons going (the awaited fifth book of The Song of Ice & Fire saga)?

It is going pretty well actually, I am hoping to finish it by September or October that is my goal. 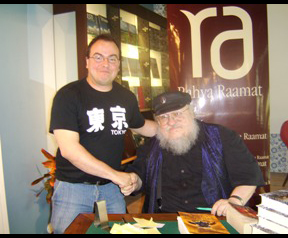 You started writing the first book of the Saga, A Game of Thrones

For me, and I suppose that for most of the readers, it was really shocking when Eddard Stark got killed in the first book of the Ice & Fire saga. For example nobody would ever expect Frodo getting killed at the beginning of Lord of the Rings. Did you want to break concepts and mark a new line with that conception, did you know from the beginning that it would happen?

Oh yeah. Well, you kill an important character right on and you kind of establish that you are not playing for kids, you know, that it is not going to be that kind of fantasy where the hero goes through all kind of dangers and never gets scratches.

From the characters of The Song of Ice & Fire, is there any that you would feel especially identified with?

Tyrion Lannister. He has always been one of my favorite characters. They all have parts of me but Tyrion has changed together with me more than any other of the characters.