FREE! Magazine is honored in publishing this interview (that appeared originally in our partner´s website www.hardblast.com)  with this great artist, Liv Kristine, lead singer of the German band LEAVES EYES.  With her former band, THEATRE OF TRAGEDY, Liv created a new style, a new concept in heavy metal that used to be called 'Beauty and the Beast', mixing her sweet voice with a man´s guttural and aggressive singing. What makes her so different? She was the first lead singer and not a background one. Until the band´s debut in 1994, there is no record of female leading singers on this specific style of doom metal.

LEAVES EYES is getting ready to release a new album, NJORD, produced by Liv´s husband and band partner Alexander Krull and here you will read everything about it besides knowing a little more about this great and admirable person, owner of huge culture, great ideas, intelligence and talent.I hope you enjoy it! Stay rock!

You showed up to the world singing in the band Theatre of Tragedy in 1994 and created a new style that in those years was called "the Beauty and the Beast". You  were sharing your sweet vocals with the guttural and aggressive man´s voice of your band partner and was the first woman to do leading vocals and not only a background in this kind of band. It was a mix of heavy metal, death metal and classical elements with a lot of atmosphere and has influenced many other bands. What has inspired you to create this style?

I actually grew up with Black Sabbath, Deep Purple and Iron Maiden, and later I discovered Paradise Lost, Anathema, Cathedral and Type O Negative, so I've kind of always been into metal. On the other hand, I learned to love Edvard Grieg, Bach, Tchaikovsky and Mozart from a very young age. I mainly formed Theatre of Tragedy with my ex-boyfriend back in 1994 to be able to combine classical music and metal. we were pretty amazed by the songs that came out ourselves, and suddenly European labels and fans opened up their eyes. I believe we were probably the first ones to do this kind of musical constellation, especially the beauty and the beast image and the set-up of contrasting elements in metal. Some yearsago I had a nice chat with Tuomas from Nightwish. He told me that Theatre of Tragedy was his inspiration for founding Nightwish – and that really touched my heart!

When did you realize that even though you´ve got a very sweet voice you could be a Metal singer?

Well, I sang along to Black Sabbath when I was a little girl, and I spent hours in front of the mirror with my hairbrush practicing, when the other kids were playing at the play ground. i was pretty sure at the age of seven that I would some day be singing in a metal band on big stages. That was the wish of my heart, and my wish was obviously heard!

What has attracted you to music?

Singing and composing is something I've done since I was five or six years old. I learned to sing before I talked properly. I am sure I got attracted to music inside my mothers belly, because siblings are able to hear inside their mother's womb. My son, Leon, was born only 3 hours after I had finished my vocal recordings for "Lovelorn", the Leaves' Eyes debut.Believe me, he knew these songs by heart even before he was born. This music has a very calming, dream-like and positive effect on him.

Unfortunately we cannot see a large number of women really working as musicians in the rock scene. What do you think about it? Did you suffer or still suffering prejudice?

Lita Ford and Joan Jet were probably the first women in metal who stood up against all those predicting, conservative complaints. They certainly opened up for us who came a few years later. However, after the release of the first Theatre of Tragedy album, some journalists were upset about my strong presence in the band's music ("Liv kristine should better
do backing vocals"). Anyway, the fans voted for the band to be the "band of the year" in a number of magazines, and that really made me happy. Rock attitude in music should be non-sexual! Today, I am very lucky; the men I am surrounded by (e.g. musicians, journalists, fans, crew) are wonderful guys. On one hand I am the "boss", we even compete each other doing push-ups on the tour bus or I beat them in running or swimming. On the other hand, at home in the studio I love to bake and cook for the guys, and I'm always there if someone needs to talk. They are like my family (they use to say "thanks, Mum").

If you could make a short brief talking about you career along these years, what would you say to us?

I would say that I've worked extremely hard, however, I've been very lucky. I've got a fantastic support from my fans and friends from the very first moment I entered a stage in public. This is the essential power that has kept me going on and loving music when times were extremely tough. One label even tried to make me stop singing and went to court to crush my personality and singing voice. After this, I've really learned to see how cruel the music business is. it's all about money. Some people obviously saw me as a nice and friendly, naive, young Norwegian blond with a huge dollar sign on my forehead. Nowadays I sing, write lyrics and compose only what comes from the heart, for my fans, friends, and for myself. Entering the charts is an enormous bonus, however, first of all I need to be in
balance with myself and feel good with what I'm doing.

“Tuomas from Nithwish told me that Theatre of Tragedy was his inspiration for forming his band. That really touched my heart!" – Liv Kristine –

Tell us some of the best and memorable moments of your career, some of your big hits!

The release of the first Theatre of Tragedy album, secondly, years later the recordings during my pregnancy and the release of "Lovelorn" (the Leaves' Eyes debut). Being nominated for the American Grammy with Cradle of Filth's duet "Nymphetamine" was one of the highlights, too.

What´s the daily routine of Liv Kristine the mother, the wife, the rockstar?

Well, my day starts with a cup of tea, and then I go for a run through the forest and pick up some fresh bread at the bakery shop on my way back. Then I wake up Alexander and Leon and we'll have breakfast together. I'll be busy in the studio until I pick up my son from school. Then I cook dinner for everybody and we spend the rest of the day together playing,
visiting friends, going for a swim or playing drums. Yes, the laundry and cleaning the house and the studio is part of my daily dues, of course. There is little time for shopping, actually. I sometimes do that on tour if I need to get away from tour life.

What advices would you give to those who intend to follow the same path you did?

Listen to your own heart and wishes! Listen to what you inner voice is telling you about whom to trust and whom to better keep a distance towards. But you should open up for advices, and consider them, if they come from honest and friendly people.

Which bands or solo artists do you admire most? (not necessary to be rock)

I don´t know if you´ve got a play list but could you tell us your moment top 5?

Soundtrack to Madagascar 1 and 2, soundtrack to "Chocolat", the latest albums of Midnattsol and Lamb of God. 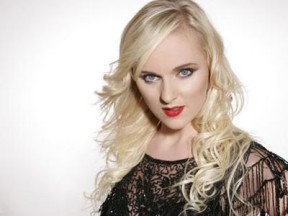 Leaves Eyes is on studio now recording a new album. When will it be released? What can you tell us about it?

This album "Njord" (producer: my husband Alexander Krull) has a power to it that even is more intense than any previous production I've been part of. Technically, we constantly have new ideas and aims. We have our own studio and therefore we have the opportunity to specialize in technical tasks concerning album and DVD productions. "Njord" has even a more bombastic but delicate sound that "Vinland Saga", because techniques allows it. We recorded the classical parts in Minsk (Lingua Mortis, supervised by Victor Smolkski), we had a complete local choir (Al Dente) singing the choir parts, a special artist playing solos on special instruments like the uillean pipe and the whistle. The lyrics are written in eh…8 languages (English, middle-high German, old-English, Gaelic, Norwegian, Icelandic, French and one "self-made" fictional language)…I even sat down to study a bit French to be able to write one French lyric. Yes, "Njord" was an even more complicated recording process than the album before, but that is part of our work as artists and composers – always getting better!
Concerning the concept, I've used two main sources for my lyrics; northern mythology and the Viking's history. The lyrics mainly deal with characters from northern mythology (e.g. Njord, Fröya'sTheme, Nine Wave Maidens, Ragnarok,), or with places and historical happenings (e.g. Scarborough Fair, The Battle of Maldon, Emerald Island, Irish Rain, Les Champs de Lavande). This is why I found it necessary to deal with all these different languages. "Vinland Saga" is based on Leif Ericsson's discovery of America, even the EP, Legend Land, which followed soon thereafter. "Njord" has a much broader concept.

Summer is coming in Europe and the concerts season too! Will you go on a tour?

We'll have to consider if we tour Europe or America first. Anyway, a tour will come up in autumn, spring this year. Now I have already started the recordings of my solo album. which I want to finish first.

Please, leave a message to your fans!

Thank you ever so much for being with me through all these years!

The author wants to thank Liv Kristine for being so lovely and Ben Aichelburg of Napalm Records for intermediating this interview. We´re honored by your support.

For more interesting features and articles about metal, you can visit our partners`site at:

2 Responses to “Interview with Liv Kristine”