Samuel L. Jackson and Bernie Mac are the left components of The Real Deal, back on the road to bring a few laughs to the audience. 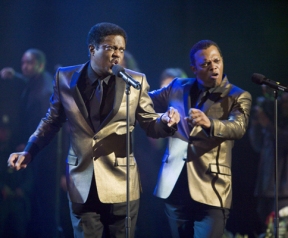 There is nothing much fresh in this CoolMen (I don´t know why the title was changed in the Finnish release, when everywhere else is known as Soul Men); you can find stereotypical topics that appear in many other movies like, for example, in the clear reference one, Blues Brothers. Here there is the gathering of veteran members of a music band, a road trip, and chases by the police, different funny experiences and gigs before the big one, etc. But it is certainly an enjoyable movie, and Jackson and Mac have good chemistry all over the movie.

It is also funny to see the winks when they are in the car with a gun to the “accidental shoot” in Pulp Fiction (remember that Jackson was driving that car while Travolta blew the brains out of a guy in the back seat.

Good music and a good fun during a bit more than one hour and a half. And Sharon Leal is totally delightful as the young Cleo!

The best: Bernie Mac putting faces while wild women literally”rape” him in the bed.

The worst: Maybe it is not much original.

The detail: Bernie Mac passed away in August 2008; almost the same date that other co-star of the film, Isaac Hayes.