Balls Out: Gary the tennis coach

Sean William Scott is back doing the roles that he does as his best: showing no brains in another delirious teenage comedy! 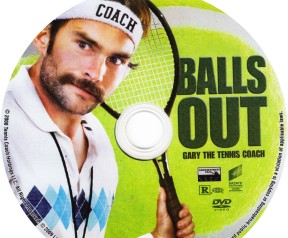 I was expecting a bit more from this movie, when I saw the cover. Obviously, I knew it had nothing to do with any philosophical content, but I have had a good laughs with Sean William Scott in some of his other movies, like in the American Pie saga. I was quite disappointed at the end of this one, the world of tennis has not been milked good enough in the comedy genre (it has been otherwise in other genres like the romantic one in Wimbledon).

My respect for Sean William Scott, because I think he is a good actor, and could probably do well in other genres apart from teenage comedy, but this one will not be remembered as one of the best in his filmography. Pretty forgettable.

The best: The scene at the beginning with a donkey in a cantina in Mexico.

The worst: Sometimes it has a gross humor that makes no sense, like Scott puking or shitting in the middle of the tennis court.

The detail: The conversations about tennis skills and the game of the players are actually quite close to the realistic tennis world.