Peter Shallmin, bassist and orchestrator of this project, tells to FREE! Magazine Finland more about one of the most interesting rock bands that have seen the light during this ending year of 2014: ESCAPETHECULT, counting with a luxurious line up with members scattered all over the world from such prestigious bands as Primus or King Diamond as well as his personal views towards music and the future projects that could await the band for 2015:

Thanks a lot for taking your time to answer FREE! Magazine ́s questions! Can you tell us a bit from where came the idea to form the band, being all the members geographically so far away? I have read that Internet played an important part of putting the project together.

Thank you, Antonio! Yes you are right. Internet does the whole deal to make happen this extremely hard to realize project. Just imagine, we are from different lands USA, Sweden, France and Siberia and we can not simply now just communicate but also compose music and record together. Yes it takes a lot of time but, damn, it’s so exciting!

To say where the idea came I should make a flashback to my youth when I was a 14-years old boy when I’ve heard PRIMUS in the first time with their “Frizzle Fry”. My jaw was dropped when I’ve heard it. This was exactly what I wanted to play some day but through my own angle. A truly unique band I sincere love. I was dreamed to play with Tim Alexander someday, this idea has been not forgotten and finally it was happened through many years with ESCAPETHECULT.

Mike Wead is another pro I admire through the years and value so high from MEMENTO MORI era and then KING DIAMOND. I’m a lucky one to say he is my long-time partner in another band KAMLATH, I rely him on everything. After years of research for the vocalist I was rewarded with Matthieu Romarin of UNEVEN STRUCTURE – he is exceptional talent. It’s a great experience indeed and the result was mind-blowing.

In most of the media ESCAPETHECULT is announced as a new “superband”. What is your feeling when you read that, does it help that most of the members belong or have belonged to renamed rock bands?

It doesn’t have a sense for us. The main and the most important is the music we can create together and play to this world. Being “supergroup” or being called “superband” is mainly for mass media, we are too far from that. Without doubts the ESCAPETHECULT’s line-up is very attractive but, believe me, the main intention, my driving force was not to “collect” the names but to play with the musicians I sincere admire. I’m quite lucky to have a chance to work with such legends as Tim Alexander and Mike Wead. As for Matthieu he is a rising star, you’ll hear more about his talent. 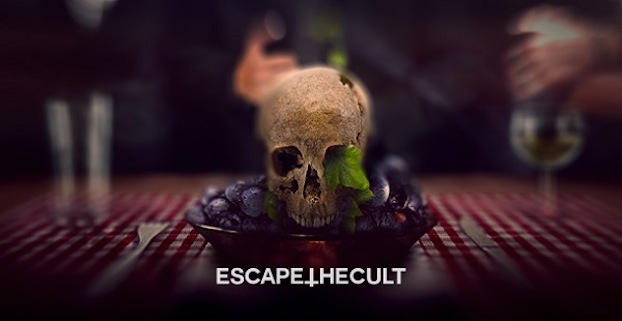 What is what this project adds to the members of the band different from their other current or past bands as a musical and personal experience?

I think, it’s my personal point of view, that it gives an opportunity to create something completely another, open the door into another universe and philosophy. Every person involved brings something different from what you are doing now or did in the past. The creative process is the most exciting thing that always brings unexpected results. You can’t plan, can’t specify and can’t control the idea when it becomes a part of the collective of creative minds. It’s magic. It expands beyond… Tim, Mike and Matthieu are top-notch professionals and their personal approach and contribution is priceless and unique.

How would you describe to a new listener what they would expect from “All You Want To” first album?

Actually “All You Want To Escape The Cult” is the full (hidden) title of the debut. Weird, bizarre, eccentric, eclectic, distinctive, hypnotic, beautiful, mature, multi-layered with many musical styles, full of hidden meanings and signs and finally not heavy/aggressive as someone expected/wanted reading the names of the line-up.

Your album was released last 21 of September. How do you feel that has been the media and audience response so far these first months?

We are keeping get different reviews and feedbacks. From the highest shouts to disappointment. Associations to other bands sometimes are very bizarre. We are fine with it. The reaction always different because our music is very complex and we’ve expected this…it’s normal. Everything goes natural and we are open for criticism. You never beat the fact that we did it and we are all loved making “All You Want To” the way we like, it’s up to you to accept or decline. Everything goes as it should go.

Do you have any favourite track in the album?

Every single song is the short but deep and sincere fragment that resonates with our souls. I’m quite sure that if we do not like the song it would never have appeared on the album. The whole thing went smooth, each song has own charisma. All of them are our favorites.

Will there be in the near future any possibility to see you all members sharing stage and playing your songs live?

We’d love to and some steps were already planned for the coming 2015 year. We’ve got some interesting offers for tours and we’d happy to play it for our kind audience. It’s very demanding project that requires a detailed attention, a serious management and many technical aspects to achieve. We still have to do many things together in the real time to confirm that we are ready: a new album, new videos. At least for now our concentration is mostly on the composing process and then to record the second album.

And a short fast questionnaire:

-What are the current bands you enjoy the most listening to?

Depends on many factors. Last time I enjoy being in silence. This year I discovered CROBOT, ISAAC DELUSION, new NIGHTINGALE, BLOODBATH, SEBASTIEN TELLIER were amazing…

-What musicians you would love to share stage with?

Anything you want to add guys?

Few words to our new listener: We will be glad to hear that our debut has touched you, transformed something within, given strength, returned from somewhere, unlocked a “window” or even just brought a fresh breath. Every single word will inspire us to create new music. And thank you, dear Antonio, for this interview. We wish FREE! MAGAZINE the best of luck!