There was a time right after the great The Sixth Sense when I thought, and I was not alone, that M. Night Shyamalan was destined to be the next big director for thrillers in Hollywood. Nowadays, Shyamalan is just a bad parody of those times, seeming that every new one of his movies just gets worse and worse than the previous one. And once again I must not be alone in this, when he got a handful of Razzie Awards, the ones given to the worst of cinema industry every year, for this The Last Airbender.

Honestly, how is it possible that directors like Peter Weir need to wait almost a decade between project and project, and Shyamalan still counts with huge budgets and great stars for his movies? They say that sometimes you need luck in this life… 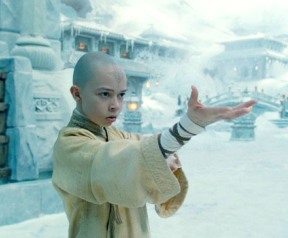 All in all, actually The Last Airbender, is not such a bad movie, at least if you compare it to the previous Shyamalan`s movie, The Happening, that must have been one of the most ridiculous and stupid movies I have ever seen in my life.

It is true that special effects and decoration suck, and the movie looks quite childish, but there are a couple of characters like Dev Patel as Prince Zuko and Shaun Toub as Uncle Iroh that make more than a decent role.

It will probably disappoint the followers of the original comics’ series, but it is certainly a movie that you can watch with the family, if you have children.

The best: Dev Patel as Zuko creates an interesting character where good and evil mixes perfectly.

The worst: It seems there are 3 more parts of the saga to come…

The detail: Maybe Dev Patel looks familiar, as you may have seen it in the previous Academy Award movie winner Slumdog Millionaire.

2 Responses to “Review: The Last Airbender”