Riding with the devil’s girl – Exclusive with Juho Juntunen

From the twisted mind of the famous Finnish rock journalist Juho Juntunen comes a new and original book: Paholaisen Morsian (The Devil’s girlfriend), a non political correct work that suits very well with Like’s policy of taking higher risks than the other mainstream Finnish publishing houses. An exhilarating story that can get read like a comic and could remind you a visual script of a failed Tarantino´s film.

Sharp dialogues (the book is only available in Finnish for the moment), pretty girls, hard guys dressed in leather riding motorbikes, gore action and tones of fun with a very typical sense of Finnish humour indeed, where drinking is always mixed with the fun. 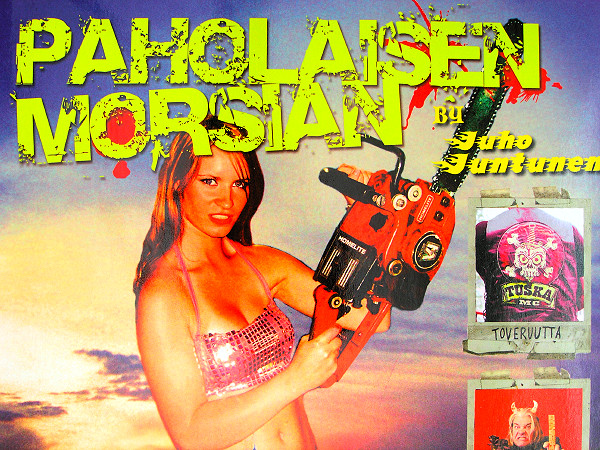 "I got this idea a couple of years ago. I’ve been doing comics and cartoons for a long time and it’s really lonely – it’s only you, some background music, a pencil and a paper. So I thought that maybe I could use my friends. Do some work and party with them at the same time. I’m a big fan of B movies and I really respect movie directors like Russ Meyers, John Waters and yes… Tarantino. So it was clear to have some sex, bad behaviour, lots of booze and Satan himself in this comic book movie", Juho explains to FREE! Magazine.

Although at the beginning you can get shocked with the feeling of reading a bad script for a B-movie, the book catches the attention soon, it is easy to read and very entertaining. Juntunen counts with the collaboration of many well-known friends: Tuomari Nurmio as God, Jussi Lampi as the devil, Jouni Hynynen as Jesus, the singers Katri Ylander, Agnes Pihlava and Hanna Pakarinen as ex-girlfriends of the main character or our dear friends of Hanoi Rocks, Michael Monroe and Andy McCoy, as aliens coming from a bad dream, among others.

Everybody wanted to be part of the fun (I personally miss Jone Nikula being part of the action, since the guy seems to have to be everywhere when there is an event or happening related to metal music, Idols singers, magazines or books…), and alas that you cannot avoid laughing at the twisted and stupid situations that appear in the book once after another.

“Those people were pretty anxious when I asked them to do their roles. In fact, nobody said no. The timing was the only problem. Some rock stars like Ville Valo of HIM, PMMP girls and Jyrki 69 had so tight schedules that we couldn’t arrange the photo shootings” tells the author. 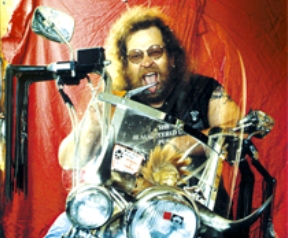 Reetta Weidlich as the “innocent” virgin stripper appears deliciously sexy in every sequence, but some photographs are not recommended for sensitive stomachs, due to the appearance of great amount of blood and viscera when the zombies enter into scene.

Included with the book there is a cool CD that acts as a soundtrack, a nice detail for the buyers. I knew that if I’m doing a comic book "movie", a soundtrack album is a must. Most of those songs were recorded especially for this project and the bands were really into it. I’m really proud of the main theme written and recorded by Honey B and the T Bones. It has just the right Tarantino feeling! Listen to that guitar twang! affirms a proud Juntunen.

And the experience really seems to have brought tones of fun for the author and his crew, since they are even thinking about the possibility of repeating the experience and creating a sequel for next year: It was fun to notice that it was unnecessary to do any makeup for the actors. Bikers, zombies, strip tease dancers, Satan worshippers – they all looked just like that in their own. Even the leading lady used her own costumes. The only problem was that one booze factory was supporting us and sometimes the actors were pretty drunk. But anything for ART – even alcohol! Juho jokes.