River cruising: Egypt’s a Nile ahead

Cruising along the world’s longest river combines sun, culture, ancient moments and all on a comfortable floating hotel.

If the Nile didn’t exist then Egypt wouldn’t, not at least with its present population: currently 76 million and adding another 2 million mouths annually. Looking at the country’s current geography, it’s difficult to believe that seven millennia ago it was lush savannah roamed by lavish wildlife such as elephants, gazelles and lions before a climate change altered things drastically. Apart from the long ribbon of water and its adjacent green bands that snakes its way from sources in Ethiopia and Uganda, desert ochre is the primary colour nearly everywhere. 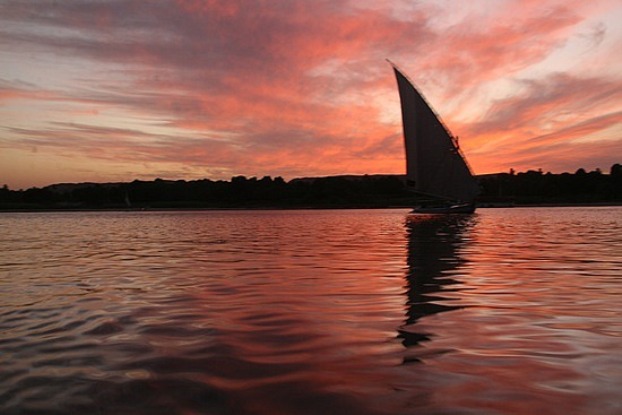 For all but the hardiest Egyptologist, a cruise from Luxor to Aswan is an intensive history lesson where knowledgeable guides deliver a bewildering series of facts, figures and background in a veritable flood. For example, Egypt is now an Arab republic, but most of what is on display was created and built by ancient Egyptians – a completely different people. Arabs immigrated just a few centuries after year zero, but the countries (there were two: upper and lower kingdoms) had already been overrun and ruled by Libyans, Nubians, Persians and Greco-Roman kings and pharaohs. Similarly, after the Arabs, came the Ottoman Turks, French and the British – all of whom absorbed to some degree local influences while leaving their own marks, sometimes literally in the form of carved graffiti defacing aged stone monuments.

The 360-odd riverboats that now sedately ply between the two cities of Luxor (Thebes in ancient times) and the beautiful metropolis of Aswan (where the British smartly based themselves for their 19th Century Sudan campaigns) are similar in design: up to five decks above the waterline with cabins and a restaurant, bar and reception to the sun deck with its pool and canopy-providing shade. Most are given 4- or 5-star status but that may not always match a traveller’s definition.

One thing is certain; the infamous health problems are as much a thing of the past as the itinerary. Food is washed and cooked in mineral water sparing the toilets the occupancy rates of yesteryear. And in addition to the inclusive excursions to see temples, tombs and towns, options cover hot air balloon sunrise rides, day-trips to Cairo plus sound and light shows. The latter two are not recommended: the Egyptian capital cannot be seen in hours and the shows lack any movement as the title implies.

Nearly all cruises start from Luxor, but before casting off, visits to the nearby Luxor and Karnak Temples are hors d’oeuvres as a taste of things to come. Both are fine examples of ‘Egyptian’ sites (as against those showing the Greek or Roman influences of the rulers of the day) of worship to their gods – the main trio being the great sun god Amun-Re, his wife Mut (Mistress of Heaven) and their son Khonsu (Moon God). Then it’s off to the Valleys of the Kings and Queens on the arid west bank of the river where royalty and nobility have their final resting places hacked out of rock and decorated with finely worked and coloured hieroglyphs, all by hand, and stocked with treasure for the afterlife. Taking in this plethora of superlatives taxes the perception, brain and memory. Fabulous sights such as the two 20-metre high Colossi of Memnon statues (remains of Amenhotep III’s temple), the Nobles Tombs and the Ramesseum appear as side shows compared with Queen Hatshepsut’s stunning temple at Deir al-Bahari. If possible, a visit the nearby artisans’ village, where the people who created these places lived and died reveals the lives of the craftsmen who created this exquisite ornateness.

Messing about on the river

After setting sail, the sun deck is the place to watch local life pass by: for ornithologists alone, there is the eye-boggling spectacle of hoopoes, egrets, cormorants, herons and ibis flying, fishing, wading or just floating by on branches. Their colours and sounds are matched by local fishermen and riverbank villages complete with compulsory mosques. Mud-brick dwellings are not usually painted or decorated, but now some do so – for the foreign visitors a guide informs.

As the water and day drift by, it’s worth recalling that 95% of Egypt’s population now live by or on the river and its floodplain, which waters just 5% of its land. Until the High Dam was built, the annual autumn flood used to decide its economic fate: a good wash of Ethiopian mud and nutrients would feed the floodplain and ensure a bounteous harvest. ‘Nilometres’ measured its high point and thus formed the basis of that year’s taxes. 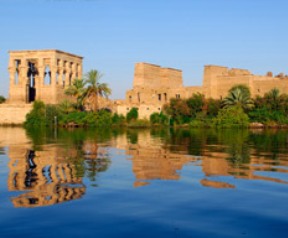 Pulling in to Edfa, horse-drawn caléches line up quayside in expectation. (Although the French were in Egypt a mere five years, before Nelson evicted them, it’s considered a Francophone country). Here, the Ptolemaic temple to the falcon god Horus (237-57BC) and many succeeding sites are constructions of Greco-Roman rulers who used local culture for their own purposes, but were bewitched too. The entrance and hypostyle hall architecture shows their influences in this well-preserved structure.

Next port of call down, Kom Ombo’s impressive approach at sunset would persuade anyone to get out a camera and burn an unforgettable memory. This temple is unusually dedicated to two idols: Haroeris (the good doctor) and Sobek (the crocodile god). The crushed stone used to colour the walls and columns remains vivid.  As the sun sets, the flora and fauna cast gentle curved outlines on the water as feluccas and fishermen draw dark shapes against the red glow on the horizon. The silence is serene. Dinner awaits. Could it be better?

Early signs of nearing this city are the feluccas with their distinctive angular lateen sail. This southernmost city is a centre of the Nubian people. In pharaonic times, there existed Lower Egypt around the river mouth called the White Kingdom and Upper Egypt spreading out from Thebes named the Red Kingdom after the nearby stone. Nubia, with its dark-skinned people occupied an area that reaches far into north Sudan.

Smooth rock formations and outcrops, the First Cataract, dot the river and banks. The city’s business and residential buildings, hotels, mosques and shops perch on the east side. Two islands, Elephantine and Kitchener’s, serve different purposes as residential and recreational areas between the two banks. At night the west lights up to show the nobles’ cave graves of Qubbet al-Hawa.

Time here is precious as the list of places to visit would demand longer than is given, from the quarry where stone was hewn for temples and tombs down river to Abu Simbel. Not to mention the souk, dams, museums, Coptic cathedral and monastery, Old Cataract Hotel, Corniche, the Aga Khan’s tomb and local Nubian culture. Their straw coffee filter is just the tip of differentiation. 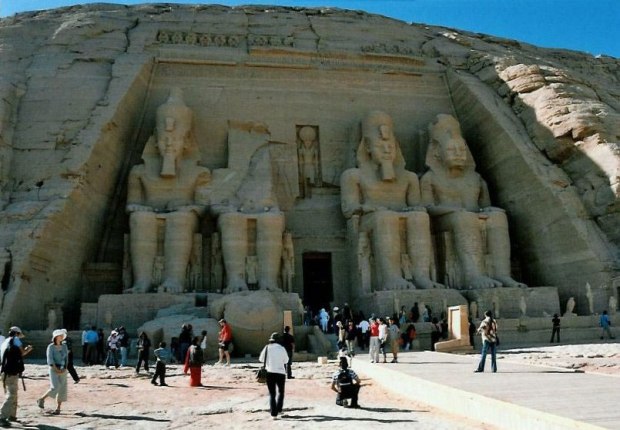 To keep it simple, there’s the relocated Philae Temple, near the British-built Old Dam completed in 1902 after 13 years. This was dwarfed when the contentious High Dam was completed in 1970 reducing the threat of flood, storing precious water for dry years, supplying 65% of Egypt’s then power supply then and creating the world’s largest reservoir: Lake Nasser.

Conversely, the annual wash with its precious silt was halted causing farmers to use fertilisers for the first time, the extinction of several bird species and disrupting the environment along the river to its mouth. Locals claim the Nubian culture will never recover. While under construction, a massive international effort in the 1960s rescued the most precious pharaonic archaeological treasures.

Abu Simbel was one, located less than 100 metres from its original site, it was built by Ramesses II to glorify himself, his favourite wife Nefertari and celebrate his so-called victory at Kush and intimidate the local Nubians too as it was a public place, not reserved just for nobles or priests. This is born out by the immense statues outside the two temples, now located inside a man-made hillock.

Built in the 13th Century BC it was re-discovered in 1813 by a Swiss explorer, J L Burkardt, when sailing passed who unfortunately informed Givanni Belzoni. The Italian promptly went and looted it as soon as he could. Carvings with dates bear testimony to his avarice. But the grandeur could not be stolen. A cruise along the Nile forms indelible memories that will remain lifelong, as it is eternal.

The British poet Shelley was inspired by the Ramesseum to pen his classic Ozymandias. Similarly, Agatha Christie appropriately wrote ‘Death on the Nile’ at Aswan’s Old Cataract Hotel. Alexandria was home and setting for Lawrence Durrell’s ‘The Alexandra Quartet’.

Due to its Francophone status, continental twin-pin plugs are standard.

Alcoholic beverages are not cheap in Egypt and on board are very expensive e.g. €5.50 for a half-litre can of local Sakkara lager.

Though the crew and guides are bought off by a tip paid in advance (GB£15), other Egyptians expect baksheesh off tourists. And bargaining is ubiquitous – with a third of the original asking price as normal.Government shops though are both cheap and hassle-free. Ask for their address. 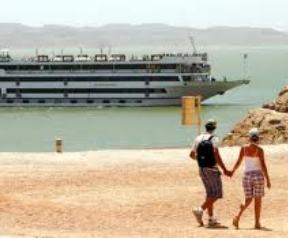 Quietly inquire if alcohol is for sale – just because it’s not on the menu doesn’t mean there’s none available. As alcoholic drinks are scarce and expensive, stock up at the airport on arrival where a good range of products are both available and illogically cheap. The local lager and aniseed brew are good; whiskey of doubtful quality and the wine may not be to your palate. ‘Egyptian champagne’ – karkadeh is a refreshing non-alcoholic concoction made from dried hibiscus flowers.

Smoking is an Egyptian way of life. Tobacco is consumed voraciously in cigarette form or via a water pipe (sashwa) and getting close to a local man (women are never seen smoking in public except in big cities) can form the impression there is national halitosis. Food is not spicy unless added. Tea and coffee are sweetened to the point of nausea – 5 teaspoons per small cup. And the coffee has a thick foundation at the bottom so don’t throw your head back and pour it down. Curiously, fish is rarely on the menu.

In Aswan, most tours call in at a perfume house where the essence oils for famous scents are produced. If it is a reputable approved establishment, it’s a bargain. You will be proudly informed that western products (that have different names here) are 90% alcohol and water which disappear quickly, whereas essence never evaporates. This is true and a small inexpensive bottle makes a great gift or souvenir. And it is impossible not to have at least one small stone carving or papyrus in your suitcase at the end.

Jewellery is another memento, but caveat vendor – choose your shop carefully. Herbs too and natural indigo are cheap and widely sold. Egyptian cotton is world famous, but expensive except from a state store. Buying and wearing the regional costume, a one-piece shoulder-to-toe    gallabaya is another must-have.

Lastly there are two schools on the origins of the words Egypt and Nubia. For the former, it either derives from the ancient word kemet meaning black soil – or if you prefer, black people as some claim.

Similarly, Nubia comes from the word nub meaning ‘land of gold’ for which it was renowned or the tribe Nuba that inhabited some of the kingdom then. Nubians were Christians for about a thousand years until the 15th Century too.