Vantaa celebrated a few days ago the first edition of a new festival in Finland: Rockfest (even when some artists would not know understandably the difference between Vantaa and Helsinki and would just salute to Helsinki from stage, but we can forgive that, right?).

As every time that a new event takes place, there are always good things and bad things to highlight. FREE! Magazine has been bringing you news in English about the music scene in Finland for the last 10 years, and once more we were accredited there to check the best festivals and venues in the country. Here are our top 5 things that we really enjoyed in the festival and the top 5 that maybe deserve some improvement if organization decides to repeat in following years the experience: 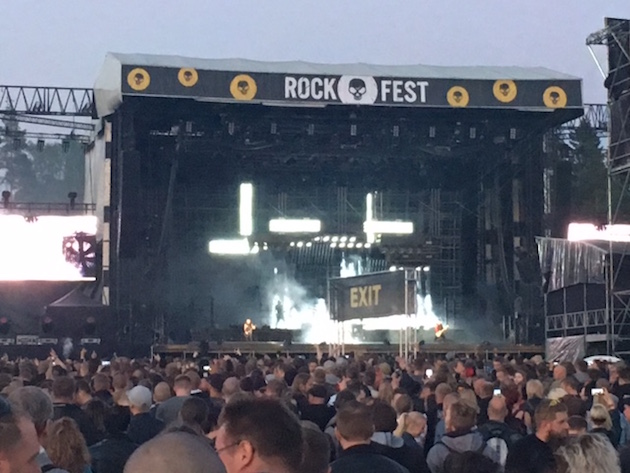 The Germans are always a safe bet for any concert organizer in Finland. Finnish fans love them, and they love the country back, visiting often this Nordic country. They headlined the festival the first day on Friday, and together with the sunny weather, brought a huge mass of spectators to enjoy the show. Their live performances never let down and can be surely counted as the best visual and music experience to enjoy in the last decades. Although the sound quality was not the best, they delivered what people wanted, straight to the point without wasting time in speeches, one hour and a half of strong music that hits like a straight bullet to the head.

2. Easy to arrive by train

The venue was located just in front of Vehkala train station, so even when was a bit far from Helsinki centre, transportation was very convenient to arrive. Another different story was when leaving at night…

Many stands with different choices of food for all tastes and other entertainments so the audience would not starve during the long hours of the evening.

Everybody living in the capital area of Finland knows that this summer has not been the best weather related so far. Pretty much, you could see the sun for a couple of hours and then follow up by 5 days cloudy, cold and rainy. However the gods of metal sent a wink to the festival and for 2 days one could enjoy in just shorts and T-shirt the music around. The audience responded, overall on the first day on Friday, going massively to enjoy the chance to hear music, drink beer and get some tan.

This is more of my personal choice as I used to follow the band 20 years ago and never had the chance to see them live. It was quite exciting to be able to finally seeing Sandra Nasic singing some rock anthems like Big in Japan or Open your Eyes. 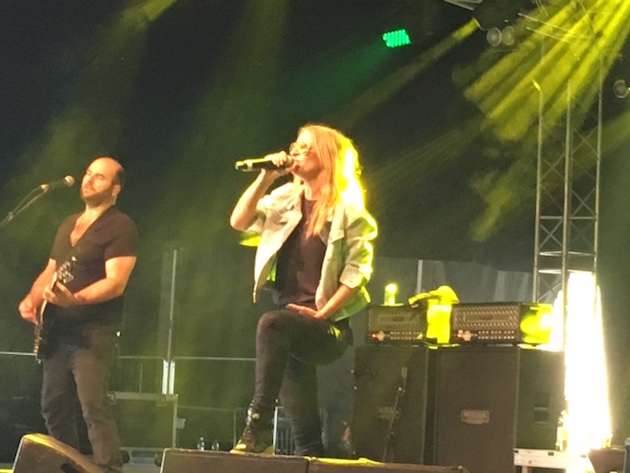 Things that did not rock!

1. The rocks scattered all over the festival venue

Yes, we know the name of the festival was Rockfest, but it felt a bit unnecessary to have to step all over big stones in most of the surface of the festival. I am sure more than one assistant ended up with the ankle twisted there. We also like Tuska (Pain) festival, and that does not mean we want to be whipped when entering the venue. Some grass areas to sit would have been truly appreciated instead of the choice between rocks or mud.

2. The drinks prices and the long queues on Friday

Of course festivals need to make money, but paying 7 euro (one euro gets returned if you give back the empty can) for a 33cl beer or cider is a bit too excessive. Not that the price would matter to many Finns who were decided to spend hundreds of euro to get wasted on Friday at literally any price. But still, too much, specially when we add queues of half an hour to order a beer or one hour to order a burger. If organization wants to put those ridiculous prices, at least they could beef up with more manpower to speed up serving.

At night security decided to close Vehkala station and make people walk a couple of kilometres until the next station in Vantaankoski where people could take buses, taxis or trains. At least organization could have let know of this in advance as most people got surprised the first night about how to reach back home.

Painful to say, but the simple truth is that the festival did not have the quality to keep up for 2 days. It is true that the first day Rammstein attracted a big bulk of fans, but on Saturday assistance was maybe one third in comparison. Being honest, for much that Evanescence is a nice band to watch, it was not enough to headline the second day (practically all the audience left after their show without even waiting for an encore). The festival missed at least one more big name to headline for Saturday, so many people decided just to buy a one day ticket or simply not to come back for Saturday concerts.

5. The tent of the secondary stage was too small

Some people complained that they could not see a shit there like in the show of Kotiteollisuus that is quite a popular Finnish band. If you want to have a second stage, at least make it accesible and big enough for the spectators to enjoy.