US Punk mob Room Full Of Strangers are set to hit the road through Germany this autumn in support of their new album “Bad Vacation”, which is set for release on October 30th through True Trash Records & Godless America Records!

The band will be appearing at the following dates:

For US whatever-punks Room Full Of Strangers, in 2015, it’s a Love / Hate situation. It would be easy for a band of working class guys, with roots in America’s Rust Belt, struggling to make ends meet, to embrace hate, lash out and become big drinking, fist-fighting, rock n roll clichés. In fact, for a period of time, that’s exactly what happened. The sons of immigrants and factory workers, Room Full Of Strangers haven’t always managed to plough the path of controlled chaos that they currently inhabit – for a while it was just chaos. It wasn’t so long ago that their shows were sparking mass brawls and, in one terrifying instance, witnessed the tragic overdose of a member on stage… 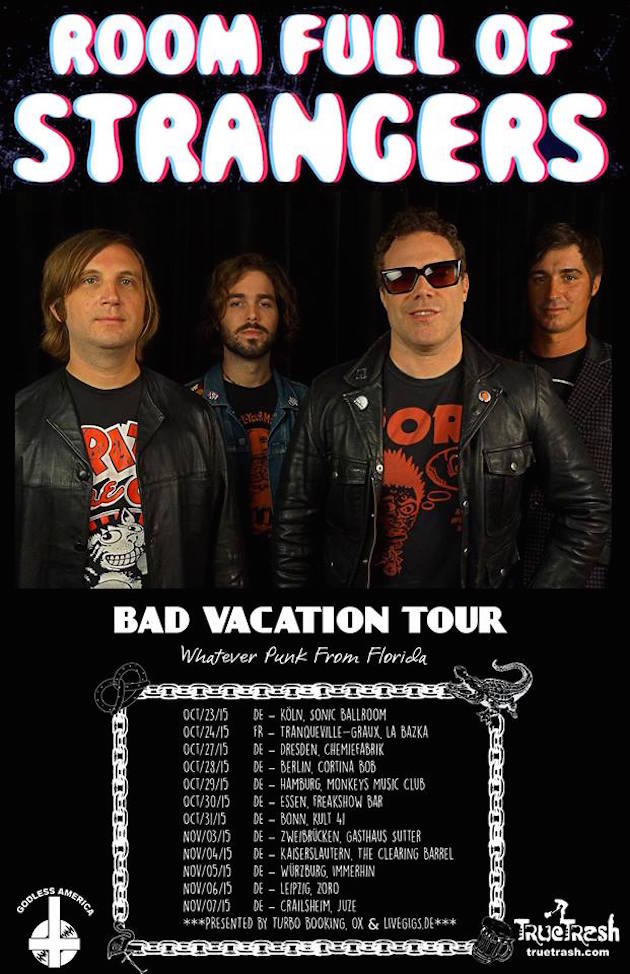 Led by front man Mick Mcluan, it was time to embrace their struggle, and the difficulties of being in a penniless band, in a very different way. They looked to other Rust Belt bands like The Stooges, Dead Boys, DEVO, Pere Ubu and Lux Interior, and instead adopted a new outlook – one they’d need to stick to, if they were to come out of this alive and well. The band got pro-active. Their own self-promoted (huge) warehouse parties drew the attention of proper venues and producers. The offers were coming thick and fast, and they now boast a live show so renowned that they’re invited invited to play CMJ every year and fests such as SXSW, CBGB Fest and have shared stages with acts as varied as Joanna Gruesome, Fan Modine (members of Neutral Milk Hotel), Jacuzzi Boys, Capsula (Bilbao Spain), The Misfits and – GG Allin’s band – The Murder Junkies.

Naturally it wasn’t long before acclaimed knob-twiddler and Godfather of the NYC underground art punk scene, Mark Kramer, known as Kramer (Jacuzzi Boys, Half Japanese, Sonic Youth, Daniel Johnston, Butthole Surfers) discovered the band and put them in the studio. The resulting sessions became new album ‘Bad Vacation’ – an album packed with collective experience, ferocity, punk spirit, all set to an us-against-the-world party soundtrack. This is a band who is influenced by its own collective personalities and life experience, and a band that ardently refuses to write music that is derivative of the sound du jour.

“Bad Vacation is about real people, places and things, and reflects on our life story as band. It’s kind of like being the main character in the movie Shawshank Redemption. At first you’re screwed, then screwed a little less and ultimately, if you’re patient and persistent, you get to crawl through a sewer pipe of crap to your freedom.”

Designed to carry you signed, sealed, delivered, in a sweaty heap on the floor, ‘Bad Vacation’ serves as a reminder that bad trips happen, but you can always come out the other side.