Awarded with the Oscar to the best documentary, this is undoubtedly a visually shocking piece of work by director Louie Psihoyos and his fellow activists.

Many people can attack the documentary of being too American, too hypocrite, too high-budget, and too many other things, but The Cove is undoubtedly one of the best documentaries of the last decade. It won´t leave you indifferent.

Edited in a very clever way, turning the story all around the figure of Ric O`Barry, the famous dolphin trainer who took command of the famous “Flipper” and later reconverted in a hardcore activist pro-dolphins, and his fight against the slaughter of dolphins in Taiji (Japan), it shows to the watcher a very different face of Japan. For a country that it is usually identified with efficiency, respect to traditions, martial arts, new technologies and sushi, it is in a way “refreshing” to contemplate also its darker side. 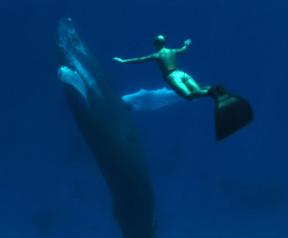 The images are sometimes beautiful and sometimes brutal, being the crew supported by the latest and most sophisticated technologies. The peak of the movie is undoubtedly the last 10 minutes where you can finally contemplate in horror what happens in Taiji and its infamous cove.

You will love and you will hate this documentary if you are an animal lover, because it shows that in the end, there is no more cruel animal that the human being himself. Luckily, there are also people who will risk everything they have to denounce to those who want to hear.

The worst: the final slaughter scene is not recommended for sensitive stomachs.

The detail: After the final credits, you can still assist to one funny scene of the documentary.