After the success of Sin City and 300, Frank Miller goes behind the camera to act as director in this new adaptation of one of his most famous comic books. 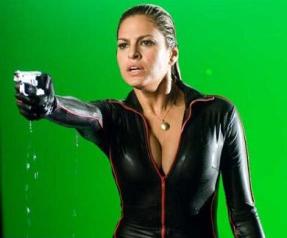 Visually, The Spirit is wonderfully produced. The comic atmosphere is once again perfectly transported into the big screen. But a movie needs some more “salt” than just a wonderful photography. Gabriel Macht is credible in his role of cheeky superhero, but many of the big names that go with him in the cast are really dreadful: Samuel L. Jackson as Octopus is on the edge of being ridiculous, not mentioning the poor additions of the two female roles incarnated by Eva Mendes and Scarlet Johansson; surely they will shine in the cover of any fashion magazine, but they still need to learn a couple of things about comic adaptations. The dialogues have some funny moments, mixed up with some silly parts, and the action scenes are really nothing special.

Resuming, the movie does not really add anything to the overcrowded genre of comic adaptations, and although is still watchable, does not fulfill the minimum requirements to pass the exam of the viewers. A weak one, could have been much better polishing the plot and the characters!

The best: Eva Mendes making a photocopy of her ass.

The worst: Scarlett Johansson. Her role is totally to be forgotten.

The detail: Frank Miller is supposedly to produce Sin City 3 in 2012.