When disability turns into virtuosity – Interview with Kaisa Leka

Editor of a yoga publication, graphic designer, cook, politician, teacher, traveler, comic artist… Kaisa
Leka has not had an easy life. She had to take the terrible decision of getting her legs amputated due to an illness. But she has learnt and taught how to see the positive side of life and make the most of it!

Who is Kaisa Leka?

I’m a 29-year old artist, designer, teacher, and politician… a typical freelancer. I live in Porvoo in an old wooden house with my husband and our ridiculously large collection of toys, books and old typewriters.

How did you start to draw comics?

I drew comics as a child, and started again when I was 19. I fell immediately in love with how easy it is to both read and draw comics; it’s a really easily approachable art form. This enables me to deal with difficult issues such as disability and reach readers who wouldn’t otherwise pick up a book about it. 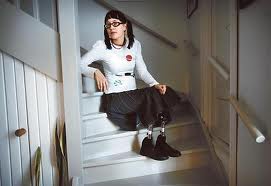 What is different in Kaisa Leka´s comic strips from other authors? Most of the times, there are some characters that appear repeated while having dialogues. Can you explain a bit more about them?

A friend of mine said that my comics are like TV’s sitcoms, and I think it’s a pretty good way of describing them. No fancy drawings, exciting car chases or pretty girls with big breasts, just simple drawings and thoughtful texts. Or at least I hope they’re thoughtful!

I suppose the amputation of your legs it is something quite dramatic and a turning point in your life. Do you want to discuss openly about it? Is your wok I
am not these feet directly aimed at that experience?

I was born with a disability that first seemed to only be a cosmetic one, but turned out seriously restricts my ability to move. I decided to have my feet amputated, with the consent of my doctors. With I am not these feet I wanted to let healthy people take a peek into the life of
disability, and also share my experiences with others who have had to spend time at a hospital. A lot of people have appreciated the way I’m breaking the tradition of silence and shame surrounding
disability and sickness.

You are active in other roles, such as politician. What things need to be improved in Finland for us, the young generations? Is Finland a country that pays a lot of attention to culture?

We have a great system of social security in Finland, but it’s built for people who have traditional 8 to 4 jobs, not for freelancers. Our generation isn’t going to have those jobs, and the system has to be adjusted to our needs. When it comes to culture, I think that the focus needs to be shifted from the masters of the 19th century to today’s artists. Culture is still often seen as something that can be supported if there’s some money left over from the "real investments", and if there is money it’s spent on projects celebrating the works of people like Sibelius
or Runeberg. 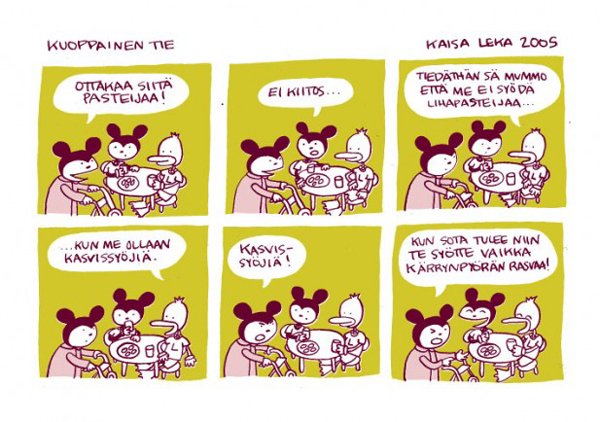 I can see that you are also very interesting in cooking and yoga.Tell us a bit more about those hobbies, and the works you havepublished about it.

I used to be the world’s lousiest cook, considering macaroni and ketchup to be a full meal. But then I met my
husband, whose food is the best I’ve ever had. Cooking has become more than just filling the belly, it’s a way of spending time with my husband and our friends, and experiencing new tastes. As a part of my
campaign for the parliamentary election this year I was able to publish a cookbook with two other Green candidates, and share some of our recipes with the Finnish public. A larger cookbook containing
more of them is one of my long-term plans.

Last year I did a book on bhakti yoga, the yoga of devotion, with a friend. As you might imagine it hasn’t been a huge financial success, but as I publish my books myself I can also publish stuff that’s not
aimed at the mainstream audience. We had a lot of fun doing the book, and have gotten some enthusiastic feedback for it from other practitioners of bhakti yoga.

You also publish a magazine, Ananda, with other friends. How is that project going?

Doing a magazine means a lot of late nights by the computer and long days working for others to finance the magazine. But it seems we’re doing something right since we were just named the Quality Magazine of the Year! A lot of people are interested in yoga now, and we want to offer a deeper look into it, as it’s so much more than just plain stretching. Through our own magazine we can let people who usually are invisible in the mainstream media get their voice heard.

Now other young female comic author, Milla Paloniemi, is getting quite popular in Finland. What do you think about her work?

I’ve only read a few of her strips but, to be honest, it’s not one of my favorite comics. But of course I’m glad
that a comic by a young female author is getting so much attention and making it easier for others to get their work published. I’ve held a lot of comics’ workshops for children and students, and I’ve been happy to see so many young girls doing their own zines and taking over this art form previously reserved only for men.

One of your passions is traveling. You did a comic stripe saga about traveling for us in the past. In how many different countries have you been, and what are your favorite ones after visiting?

I’ve traveled quite a lot in Europe, and also visited USA and India. Traveling is my big weakness, even though I know it’s really un-ecological to fly around the world all the time! I do offset my carbon emissions through www.climatefriendly.com and try to minimize my emissions in my everyday life by using public
transport and saving electricity.

My favorite places are Philo in Northern California and Vrindavan in Uttar Pradesh, India. They’re places that I’ve visited with my spiritual teacher and dear friends, and homes to many Hindu temples and monasteries.

The good thing about being a freelancer is that I can work like a madwoman for a few months and then take some time off to travel. I guess I could say that my secret to finding enough time
for everything is avoiding housework at all costs.

I have seen that some of your works can be found in French, but is it possible to find English versions (apart from the stripes you did for FREE! Magazine)?

I’ve published several comic books in English, the newest ones are On the Outside Looking in (2006, 160 pages) and Little Fish Big Fish (2007, 30 pages). I’m also planning to publish a collection of comics that have been featured in different Finnish magazines, but I’m waiting until I can put together a really big book with them. It’ll probably be in English, or at least have subtitles.

What are your future projects?

I’m currently working on a new big book about a friend who gave up his graphic design studies, left his hardcore band and became a Hindu monastic. I’m really fascinated about the way he completely changed his life. I’m also going to publish a series of short stories based on Indian mythology; Little
Fish Big Fish is the first one of them. And I just bought eight new sketchbooks (I was afraid they’d stop selling them so I decided to get a big stash) for my sketchbook blog,
so I guess I’ll also keep doing that for quite a while!