The king of comedy, Jim Carrey, is back in a role of a man who is going to turn his life 180 degrees. 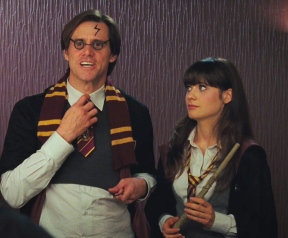 That Jim Carrey is a great actor, not only in comedies but also in dramas, is something he has been able to show during his career. But here he comes back with what he knows how to do at his best: the role of a poor loser with charm and will to turn his life upside down. The movie seems like if it would have been written for Carrey to fit as a glove, although actually it is the adaption of a book by English writer Danny Wallace. Together with him, Zooey Deschanel is just adorable and infectious, and it is impossible not to feel a bit jealous of Carrey for having the luck of sharing screen with her!

Added to this, the movie has some funny moments like the meetings with the “yes guru”, a nice way to parody the motivational speaker’s world.  Not the most original comedy and the end is pretty predictable, but it will make you laugh, it is well structured, and the couple Deschanel-Carrey have good chemistry on screen. More than enough to give it a try!

The best: The first assistance of Carrey to the gathering with the “yes guru”.

The worst: Structure is quite similar to many others Carrey´s movies.

The detail: Based on the real experience of Danny Wallace, the author of the book, who spent a year answering “yes” to every kind of proposals.