With Ari Koivunen, the young former winner of Finnish Idols replacing Niko Kalliojärvi, no doubt this is one of the most awaited and polemic Finnish metal albums of the year. 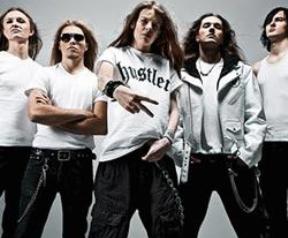 After the introductory instrumental track Random Words, the first sentence that comes out of Ari´s mouth in the album is “There is going to be some changes” in the second track Release. Certainly if there is something you can say about this Show your Colors, is that it is an album full of changes. Starting from the change of vocalist and basically continuing with the change in the style of the band. Because if Amoral was before well known as one of the most promising Finnish bands in death metal, here they approach closely power metal.  Basically, they have adapted their style to Koivunen´s vocal skills (and he really has them, Idols or not Idols in the middle). Is the result bad? Well, that depends on your point of view. I understand that for many fans of the “old” Amoral, this can be a change that they did not deserve. They could have basically ended up with Amoral´s name and started a new and fresh band. On the other hand, for fans of power metal and for those open minded metal followers, this album is good. The orchestration is great and some tracks like Year of the Suckerpunch sound like instant classics.

If you want to forget about Amoral´s previous works and welcome a new great metal band, you will enjoy this. If you are a hardcore Amoral´s fan, probably you can feel betrayed with the turn of style. My advice:  be open minded and enjoy with the great quality of the new album. The old Amoral´s works will be always there for you if you feel nostalgic.