Bringing the Surface tour is an interesting project that was surfing by bus for 10 days around the Nordic countries until arriving in Helsinki, the Finnish capital.

On head of this is Danish composer and musician Jonas Andreasen together with Finnish singer Sini Koskelainen and a bunch of talented musicians that belong to their “Near Life Experience” project that headed on this adventure from Aarhus in Denmark through Norway, Sweden and Finland, interacting with other local bands, gathering musical ideas, and offering an exciting show full of music, visual effects and dance, brought by the Finnish dancer Nadja Alve. 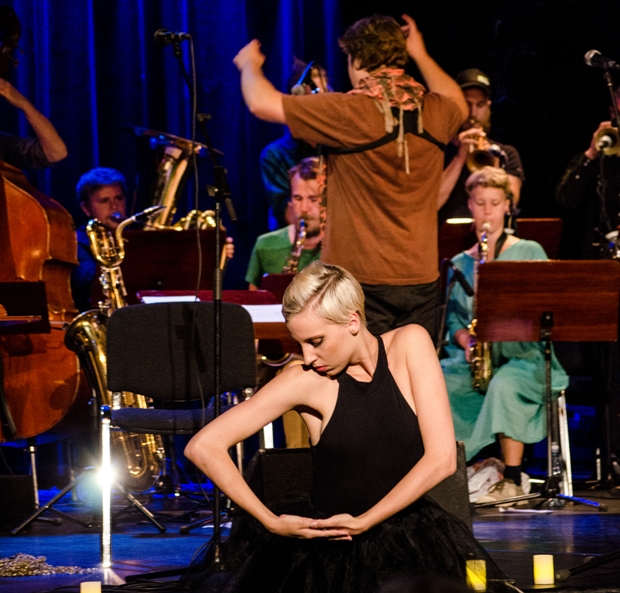 We met the crew just before their final performance at Gloria Cultural Centre in the heart of Helsinki. After 10 days on the road, they were tired and dreaming of a hot shower, plus it was not the easy end when part of the band got sick with food poisoning. However, they were full of illusion to perform in a city that Andreas recognized loves, having lived and studied in Helsinki. Before the local band Elifentree would warm up the atmosphere with some amazing skills by his drummer, it was time to sit with Andreas and drummer Frej Lesner so they could tell us more about how the tour went:

Thanks for your time! Can you tell us a bit more, Andreas, how the project to go on the road for these 10 days came up and how you met Sini (Koskelainen)?

Jonas: I was studying in Aarhus and Sini came there, we heard each other play, and I had a chance to play with her quarter. We just liked each other’s stuff and energy. I wanted to write music with a bigger group but I had difficulties to find a singer, so when I met Sini, it was a super good connection. That is how it goes started, and then we wrote music together and I arranged everything. We put the band together and we did a project together that was a big success in Aarhus. That is how the band got started. Now she is living in Helsinki and I am living in Berlin and all the musicians are in Aarhus. We received the support of a cultural organization there and we are glad to get any help, because it is difficult to tour with a relatively unknown band.

Did you know the other musicians beforehand?

Jonas: They come from all over Denmark, except of the trombone player who is Swedish. Very talented musicians that I was lucky to be able to handpick. Here is Frej, the drummer, one of the first I asked to join the band. So far we had been playing only in Denmark, so this is a big step for us.

You were in other countries sharing the stage with other bands. How was the experience to meet other musicians?

Frej: It was great, I heard some bands with some great musicians. Also this band in its own, it is great to play with this band, they are all great musicians. There is no hiding when you have to play, you have to take control of the music. And we also get to know new places to play. It is very difficult when you are sitting in Aarhus to know for example where to play in Helsinki. So it is great to expand the network. 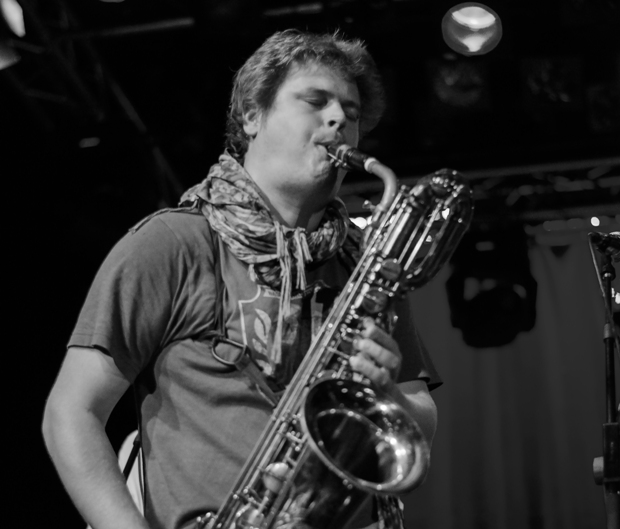 So how is to be on the road traveling by bus for 10 days? What other activities did you do… did you get much sleep time?

Jonas: We would mostly sleep when the bus was driving, but actually not so much sleep. Everyone has been sick also. But well, this is also part of it, it is something you have to do. But it has been so great musically, we have got so much, a good response from all the audience. When we arrive in a new town, we hang around the city, and then a lot of hours in the venue doing the soundcheck, getting something to eat, doing the show… and then on the road again.

They always say that Finland is different than the other Scandinavian countries. Now that you got the experience to tour around all of them, what is your feeling?

Frej: Well, just the language itself is different. It is kind of a mixture of Russian and Nordic culture, somehow.
Jonas: I have been living in Aarhus and Stockholm and Helsinki. I really love Finland so much, feel close to the Finns and to Helsinki. It has less of the Scandinavian “stiffness” that we have in Denmark and Sweden.

What people can expect from the show tonight? What are the backbone ideas behind the show?

Jonas: I would tell them to open their hearts and ears and eyes. It is a mixture, we try to have a big visual side of what we do musically. That is the idea behind the dancing of Nadja. We have some music that some people say that is hard to listen to, a mix of jazz and modern language with a lot of improvisation. Giving some visual expression really help people to get the music and get into it. A lot of people say that it was great and they had never heard anything like that. 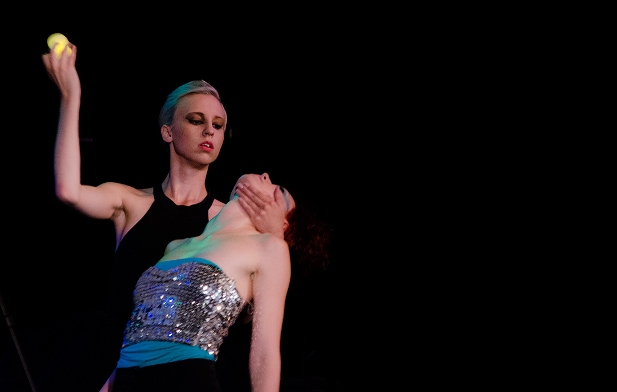 So do musicians get a lot of freedom to improvise?

Frej: Well, for me as a drummer, I feel that everything I play is something I have invented myself, but of course always on the frame of what Jonas want.

Jonas: I write a lot, but I write for certain people I know very well. So I know or at least I try to write what people need to play. There are places where people do a lot of free style, but of course I need to bring some overview. To know the direction and why something is happening right now.

What are your future plans after you finish this tour?

Jonas: We have the EP with 3 songs and we are releasing a full album, already recorded, this fall. So many things going on!

For coming back, will you go back by bus or flying?

Both: Flying! Enough bus for a while!