“Choke”, probably the best documentary on MMA ever made

Nowadays Mixed Martial Arts (MMA) is a well recognized sport that provokes admirationa nd moves a good amount of money and fans around the world. Right at my office we can have a discussion with my co-workers about Ronda Rousey´s defeat or Emelianenko coming back from retirement like if we would be talking about the latest football match. UFC is a big organization in USA, you can see reality shows in TV channels where future fighters are getting prepared to go pro, the fighters are multidisciplinary athletes that can both perform great standing up, kicking, punching or going to the ground and working on submission techniques…

But if we take a look back not so many years ago, mixed martial arts were pretty much unknown to the great sports public and most of people who had heard about it would consider it a brutal activity done by some crazy violent people. The Gracie family was one of the pioneers to expand MMA to the big audience, and at the same time promote their Gracie Brazilian Jiu Jitsu style, and Rickson Gracie was the jewel of the crown for the family, never officially defeated in any fight before.

What “Choke”, a documentary shot during a Vale Tudo fighting tournament in Japan in 1995 and released in 1999, shows is a period where mixed martial arts was growing and in development, where the fighters were still not so well rounded in multiple disciplines but were more defending their different styles of fighting and where you could see a more brutal way of fighting than nowadays, where the rules are much more measured. At that time, pretty much everything except of hitting the genitals of the opponent would be allowed between fighters.

“Choke” counts with a wide array of memorable moments for the spectator. Apart from the usual and a bit boring ranting from Gracie family members always self promoting their style, you see the real Rickson gracie backstage between fights. The documentary revolves about his figure: masculine, handsome, dominant. But he also shows that outside that facade, he is also like the rest of the fighter human, nevous before a fight, sometimes humble, sometimes big-mouthed.

As some mythical scenes and moments to remember we can see Rickson godalike enjoying the energy of the freezing water under a cascade in a Japanese river, his umbelievable training and movement of his abdominal muscles like they would not belong to his body (maybe you remember to have watched exactly the same if you saw “The Hulk” movie with Edward Norton training with Rickson in Brazil), the recognition in front of the camera of holding the rule not to have sex with his wife 2 weeks prior a fight, the moment at the fighting venue when he surprises his brothers telling he literally needs to take a crap seconds before having to go to the arena to fight, Rickson throwing Yamamoto during his first fight out of the ring noticeably pissed off at him for holding on the ropes all the time, his cat flip on the air during his fight with Kimura (his son Rockson, sadly deceased years after this documentary on a motorbike accident, commenting in the dressng room that he saw him flying like Superman) the moment before the final of the the fight when suddenly he says he wants next time to get a belt as a champion instead of a trophy… 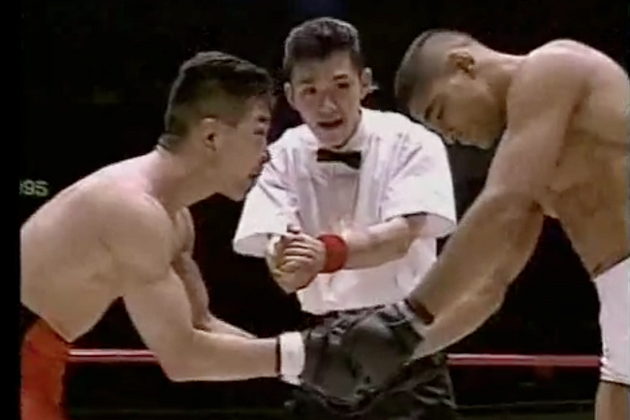 The show however gets partially stolen from Rickson by the other finalist of the fighting tournament, the small but brave Japanese Yuki Nakai. A small wrestling specialist that subsequently will lose the vision in one eye due to his fight with Gerard Geordeau (who will pass to the history as one of the dirtiest MMA fighters ever stepping onto a ring) who soccer kicked him on the head and gouged on his right eye. Nakai shows a total lack of concert about his own health, and as a true samurai, challenges guys double his size. He also became a legend by hiding for years that this tournament provoked him to be blind in one eye for the rest of his life just to protect the reputation of mixed martial arts. On favour of Rickson Gracie, we have to say that he avoided as much as possible punching Nakai on the face and moved the fight just to a grappling match.

The documentary is not the best technically shot, neither has the best structure or dialogues. But nowadays you cannot deny is an instant classic to understand the roots of MMA sport. And the best is that is fully available for free in Youtube to watch. Enjoy: