What does a Spaniard do at the backstage of Nosturi in Helsinki surrounded by Swedish metal heads while Finland plays against Sweden in the ice hockey world championship? Talking relaxed to Johannes, singer of the Swedish band Avatar. There will be time later to see how Finland loses (damn, not again!!!) against its nemesis Sweden, but meanwhile we are sitting on the sofa with a friendly easy going Johannes offering a cold beer to fight the humid warm that wraps the Finnish capital and chatting with FREE! Magazine about their trips, music, lyrics and expectations for the concert that will take place a few hours later in the same venue. Johannes is pretty familiar with Helsinki, since actually he dates an Italian lady who lives there and visits often.

Yes, I have been in Helsinki now countless times. I visit at least once a month, so I am starting to find my way around. I know the bars, well the bars because I always end up in the same one, in Base Bar. It has the feeling of a beer hall that I really love.

So are you familiar of the traditional “ferry culture”, those famous boat trips between Finland and Sweden where all kind of crazy things happen?

Oh, I fly usually, but yeah I know them. We have been on tour on those ferries. Beautiful experience! Hehehe. It is something special, like for example sharing a stage singing karaoke with Finnish truckers! 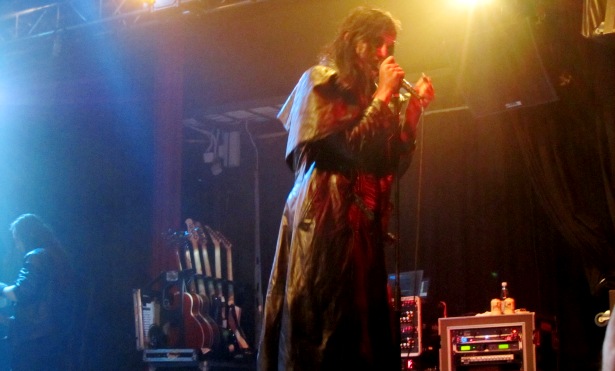 Before coming here, you were touring in USA. How was the American experience?

It was really really cool! The thing is that although we are close to start recording the next album, we are still touring with Black Waltz album and it was the first one that got released in USA, so we did not really expect much but we did really well over there, having the opportunity to do our first real tour there. We were blown away and we had the opportunity to blow people away too.

In Europe, especially in North Europe where the drinks at the bars and venues are so expensive, people go directly to see the headliners, but maybe in USA people are more open to arrive earlier and see the opening bands too, right? It must feel much better to play for packed venues…

Exactly! We play for full venues and that was really special. After that, I try to make a point to arrive earlier to the shows I want to see as spectator! Hehehe. Even the coverage with the radio stations is so different what they have there going on radio wise. I guess here the biggest coverage for metal music is printed media and webzines and there is radio and then webzines. We get played… not at all at the radio stations in Europe. But in USA, being a big country with a common language, they can reach all the few metal heads here and here and there and there, so in the end adds a lot of people. I think that is the reason… and maybe that they do not like reading so much… hehehe.

“Sharing my energy onstage with the audience is something bigger than punching someone!”

Actually I met some months ago for another interview in this same venue with the guitarist another band you toured in USA, Cristiano of Lacuna Coil, and he commented me how the economical crisis around the world makes more and more difficult for them to promote their music and keep afloat. Have you got a similar feeling of the crisis affecting your band?

The thing is that we have been around for 10 years, releasing albums for 7, but still when this crisis started in 2008, 2 years after our first album came out, and at that time Napster was “old”, you know. So we are a bit part of a different generation when we do not know any other way than the current situation here now. I guess is different for older people when they were playing already in the 90s and then they saw this transition, like “what happened to the world?”, but for us this world we are operating right now is pretty much the same one that has always been.

Have the social networks been a good tool to reach your audiences?

Definitely! And we have been learning about that. Actually I am more personally an “anti social networks” person. I was not so dragged into it, to begin with, but then you realize that the people are there and there is where they are looking for us, they are looking for us in Facebook and places like that. So it is pretty cool we can do our little competitions about answering questions and have this direct contact. So that is very cool, as far as you avoid all the shit around it. 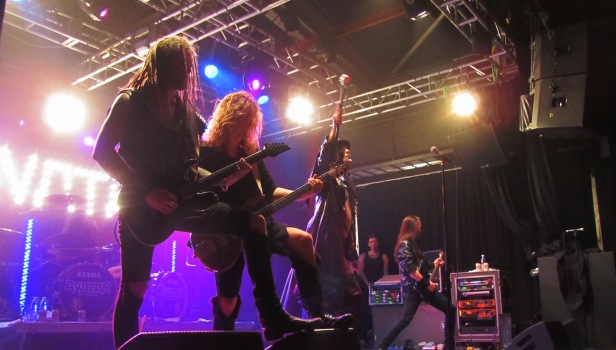 Your latest released album, Black Waltz, took a bit longer to be released than the previous ones. Any special reason for it?

Uhm, I guess so… Let´s count… The first album must be January 2006 and then one and a half year… and then 2 years. So yeah. We took a bit of time to focus on other things we wanted to take care of before releasing the album, the videos, the photos… Due to preparations, it needed a bit of delay. We tried to figure out how to get deals to release it everywhere and that takes time. And you cannot do that before the album is finished, because you want to send the record company the pictures, the videos, the songs, all the cool material. That made it take a little bit longer, but I have no regrets about it. That for example led to the US release that we talked about before, so it was good for us.

So you mentioned before that you are already working in the next album?

Yes, we have been working on it for a while and again, it is a bit too early for me to be too specific about it, but I think we got really cool stuff and now is about making all fit in the same box. I have hopes to have it released it this year, but expectations are always hard. Whatever we do, we want to do it 200%, so we still need some decisions to be made along the way. As I said, too early to be more specific, but for sure I can say that as soon as we are back at home, we will be working our asses off on it!

I have noticed that Avatar also loves paying special attention to the visual aspect and quality of the videos. For example I think it was actually very challenging to sing the lyrics backwards in “Torn Apart”, right?

Oh, yeah yeah! I would have needed two more months of practice, I guess! I was also looking for messages from Satan there, but sorry, nothing came out. Only I think I say something in a weird kind of German that is like “the trolls will stop right here”, but yeah, apart from that, no hidden messages. I have to disappoint you. But yeah, it was very tricky and funny to do! The theme was a bit of “Fight Club”, angry young men beating each other up out of pure frustration, and then came this fact that we are a bit of “circus” band in many ways and pro wrestling is totally like a circus thing to me, the extravagant showmanship fits perfectly. It was a fun way to portray this theme about frustration. 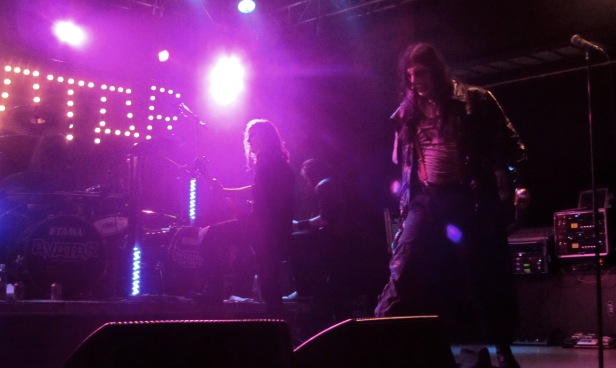 How is it for you guys when you are on tour? Do you also get those moments of frustration when you need some aggressive activity to relieve the feelings, or just booze kills the pain?

Well, beer keeps me happy, and well, maybe sounds like old cliché, but makes sense when you get onstage and you get the chance to scream and do something positive with that energy you have on you, especially when you get to share it with the audience, so you make a common experience out of it. That is something bigger than punching someone! It takes you and the audience to a better level.

Other theme that gets repeated in your music is the decadence. It seems that people find appealing the change between 2 eras, lights and shadows…

Yeah, it is a rich background to paint. It brings you automatically to some parts of your life where your actions have been maybe more decadent than other parts of your life, and that is all part of it. The transition between eras… that is when something is happening. I guess is a bit of a journey, every human being has some kind of experience of going up and down, this journey up and down, and I think those times are the most interesting to describe. And in that sense is because we like the circus theme. It has some mystery to it, the mystery of the circus. 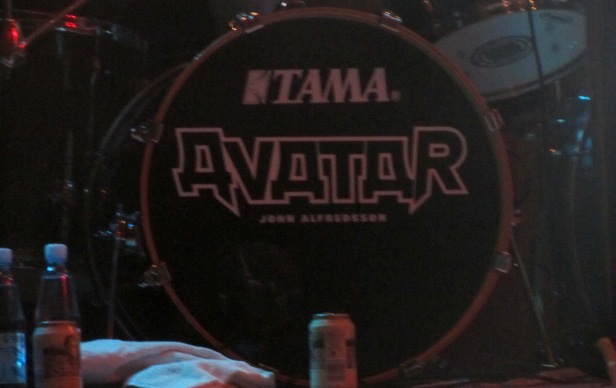 I heard you feel very welcome in the previous American tour we just talked about by the other bands. In general in your musical career, what is your favorite band to tour with?

I have never had any real bad experience with other bands, the only dramatic one was our first tour because we were kids and we did not know how to behave, what to do or what not to do. So we gave Impaled Nazarene a hard time, I think, because we were kids that someone should have slapped us! And that was our fault, not theirs. Other than that, when you get to know how to work and be together, a circus company travelling, it is always good. We got the chance for example with a band we admire a lot, Halloween, so we could see them live 8 nights in a row and I got the chance to sit with Michael Weikath and ask him everything. That was super cool and they were super friendly. With other bands like In Flames is easy because we share a common background coming from the same city, we were swimming in the same swimming hall and walking the same streets. Now it is very cool to be with Engel because we know each other for a bunch of years, they were our rehearsing neighbors, and although before we played sometimes in the same shows, this is the first time we can do something together “for real”, putting our names in the same poster.

So what will be the next projects for the summer, I suppose pretty much dedicated to the incoming new album…?

Yes, we have 1 more show in August, but this summer will be pretty much devoted to writing and recording and creating a new great chapter for Avatar!