Pedro Delgado – the romantic ideal of the everyday Spanish hero

I am a great fan of cyclist competitions since I was a little child, basically since I have memory I remember following on TV the heroic acts of the Spanish competitors in the hot summer evenings during Tour de France competition.

This evening there was a day in cyclist history to be remembered, a great victory by the Spanish champion Alberto Contador who threw an attack like in the good old times, many kilometers away from the final line, over his also Spanish opponent “Purito” Rodriguez. A very emotional victory for Contador just after his comeback to the big competition (he was involved in a very unclear case of doping too complicated to explain here). And also not forgetting the loser, “Purito” behaving like a gentleman and a true sportsman in a very bitter day. 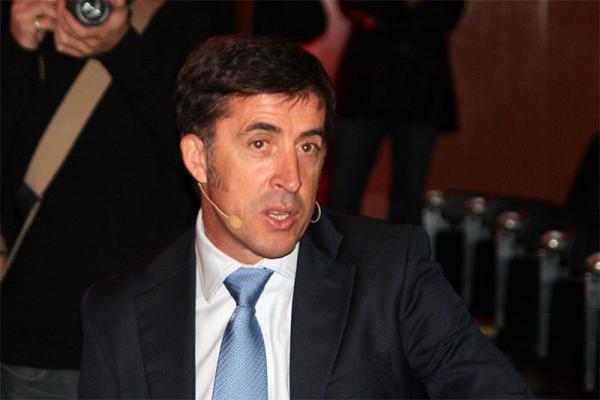 One of the commentators in the Spanish national TV channel is another great ex-champion, actually the one I grew up following to: Pedro Delgado, nicknamed “Perico” for the whole Spanish nation during the 80s and beginning of the 90s.

Delgado could symbolize very well the Spanish nation. A short average looking guy, friendly always, with great skills to climb but also eager to do crazy amazing unexpected attacks and with a touch of drama and passion revolving around all his actions and circumstances on the road and outside the road, able to lose time in the most stupid way arriving himself late to the beginning of the first stage of Tour de France one year later he would have won, that being among one of his most famous anecdotes.

I had the pleasure to meet and interview “Perico” more than 10 years ago, when I was just a journalist student in Madrid. They proposed us to try to interview to whoever person or idol we would have, and I did not hesitate to contact him. We met and chatted in a restaurant near his home in Segovia, a town not far from Madrid where he is still a legend (actually he remains as one of the most beloved sportsman in Spain).

Not every day one can meet his idol face to face, and I was a bit nervous. But when Delgado appeared on his bike at the door of his restaurant and started to joke about how hard was to climb that mountain, I instantly felt that the image of great guy he exhales on TV was actually how he really is. We talked for almost 2 hours about his career while the owner of the restaurant could not believe that “Perico” was just there, asking us to take some photographs altogether at the end of the interview, and of course inviting us for free to all the drinks and food… interviewing a legend has its little privileges…

George Orwell used to account in his memories of the Spanish Civil War how the Spaniards were horrible about planning war, being on time, taking discipline… but how they were so good about making a visitor feel welcome and sharing everything they had and enjoying the little things of life to the fullest.

Now it seems that internationally there is talk about Spain only in a negative side due to the economical crisis (and yeah, our Mediterranean temper seems to affect us negatively in trying always to cheat the system and break the rules), but I would also like to pinpoint that, similar to these amazing cyclists, the Spanish every day men and women, those anonymous heroes that try to make the ends reach with microscopic salaries and huge loans, are also full of joy, a romantic touch of craziness and stubbornness in lost causes and a philosophy of not taking life too seriously and sometimes making fun of everything themselves. As another great writer, William Shakespeare, said “All the world is a stage, and all the men and women merely players”.