AC/DC was basically the biggest band in the world that I still had not had the chance to see live. So it was a double pleasure when I could finally check them out in Tampere. For those of you who know a minimum of rock history, there is no need of presentation: AC/DC is probably the biggest hard rock band in the world nowadays. After they visited Helsinki the previous year, it was now time for Tampere to enjoy the visit of the legendary aussie band. Ratina stadium was almost fully packed, but not totally sold out. Probably the combination of the high ticket prices, the current economical crisis and the fact they were one year ago in Finland had to blame for those empty seats around the stadium. In any case, Tampere paid good respect to its reputation of rock city, with the streets turned into a big rock party. AC/DC fans with t-shirts all around, and even hundreds of people with no ticket took advantage just to sit close to the stadium and enjoy a beer and good weather. 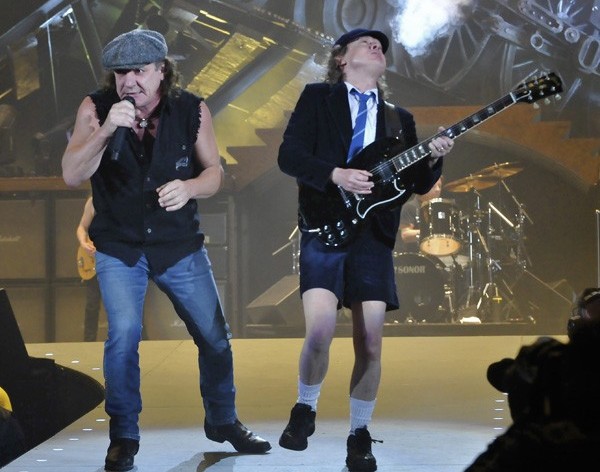 The concert was programmed to start at 20:30, but it finally kicked off at 21:10. Although the official name of the tour is “Black Ice Tour”, the band has been clever enough not to abuse playing songs from the last album, but melting a few perfect in the setlist with their classics. All in all, most of the people who go to see AC/DC expect something like this, and among the audience you could spot many parents with their children (who had the famous devil horns on their heads), so an AC/DC concert has now become a kind of family event, when the youngest of the families can also listen for first time to some of the most classic tunes in the history of rock.

Classics like Back in Black, Thunderstruck, You Shook me All Night Long, Dirty Deeds Done Dirt Cheap were heating up the atmosphere until guitarist Angus Young provoked the climax with his famous strip tease during The Jack, ending up showing not his butt, but his AC/DC boxers. Obviously Angus together with singer Brian Johnson lead the show, while the other 3 members are in the background. The formula gets repeated concert after concert and it works. It is pretty clear that they cannot perform at a physical level exactly the same than 2 or 3 decades ago, but for musicians who have more than 60 years of age, it is still amazing to see them running from one side of the stage to the other. The main stage was connected by a corridor with a secondary smaller platform located almost in the centre of the stadium, which in my opinion was pretty wasted during the show. The musicians seldom came close to it, and only in the end Angus fully used it while getting crazy and crawling on the floor while playing the riffs of Let There be Rock. 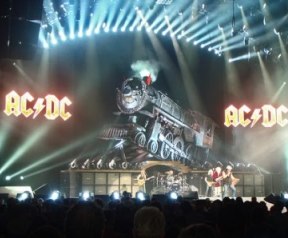 After a short pause, the Australians returned to the stage for an encore with the unmistakable Highway to Hell, one of the biggest anthem of rock history, and the cherry on top of the cake with For those About To rock and the symphony of cannonballs that explode after every line of the song.

It was maybe a little bit too short concert, I would have not minded 20 or 30 minutes more of good rock, but being realistic, you cannot expect much more than what the Australians can offer nowadays. They still can put together a hell of a show, and outcome many of their younger rock fellows when giving a concert. As I said at the beginning, watching AC/DC is a kind of once in a life experience to be told to your grandchildren, so if you still have chance to see them during the current tour, go for it!

Highway to Hell
For Those About to Rock (We Salute You)